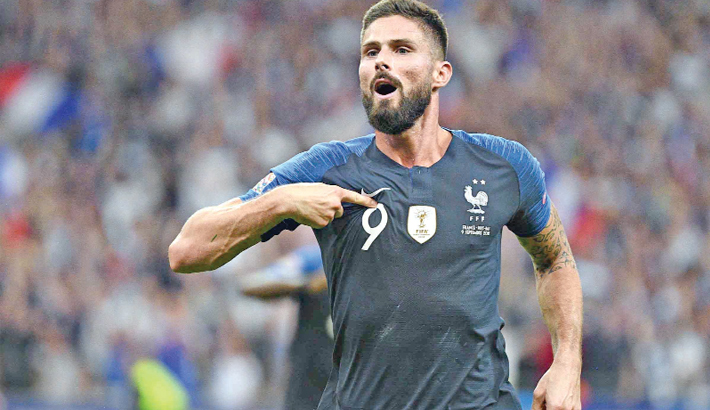 France finally celebrated winning the World Cup with their home fans on Sunday after Kylian Mbappe and Olivier Giroud both scored in a 2-1 win over the Netherlands in Paris.

Giroud swept in the winner from a Benjamin Mendy cross in the 75th minute for his first goal in 11 games in a France shirt, after the Chelsea striker went through the entirety of his country’s triumphant campaign in Russia without scoring.

On their first appearance on home soil since the World Cup, Mbappe had earlier put France ahead in an explosive performance from the 19-year-old, before Ryan Babel briefly restored parity in the second half.

The Stade de France exploded in celebration at Giroud’s winner in a game that had a competitive edge as part of UEFA’s new Nations League.

The day after beating Croatia 4-2 in the final, Les Bleus paraded hurriedly down the Champs-Elysees Avenue in Paris en route to a reception hosted by President Emmanuel Macron.

The France starting line-up was the same as that in Thursday’s 0-0 draw with Germany in Munich, meaning the only change from the World Cup final was in goal, with Alphonse Areola replacing the injured Hugo Lloris.

Mbappe forced a good save from Netherlands goalkeeper Jasper Cillessen inside 50 seconds, and his performance here showed why he is tipped as a future Ballon d’Or winner.

He got the breakthrough in the 14th minute as he turned in a ball driven across the box by Blaise Matuidi for his eighth international goal in 2018.

The hosts looked in complete control against a Dutch side rebuilding under Ronald Koeman after failing to qualify for Euro 2016 or the World Cup.

Giroud got the winner though, his 32nd for his country seeing him move one clear of Zinedine Zidane’s tally for France.