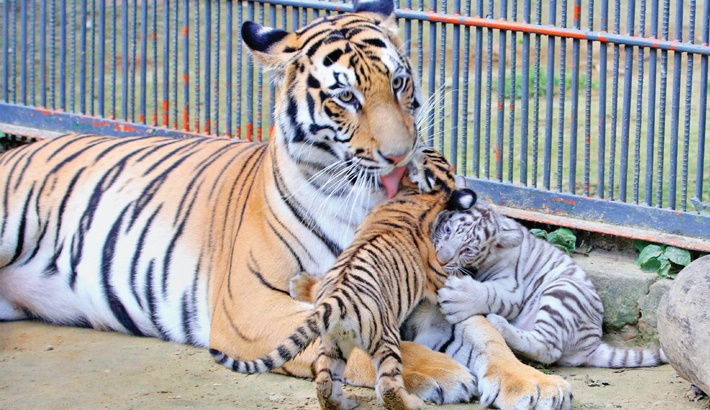 Priceless….. - Pori, a first-time mother, licks one of her adorable cubs while the cubs hold her mom’s leg at Chattogram Zoo in the port city on Saturday. The yet to be named tiger cubs are learning what it means to be a big cat from their parents at the zoo. - Rabin Chowdhury

CHATTOGRAM: A rare white tiger, also known as albino, is being grown at Chattogram Zoo in the port city.

The Zoo authorities claimed that it is the first white tiger born and being grown at a Zoo in the country.

They expected that if the tiger cub can be grown properly, it will be a matter of great attraction for animal lovers of this region.

Sources said the cub, one of the three cubs of Bengal tiger couple Raj and Pori, was born at the Zoo on July 19 this year.

Another of the three cubs died day after the birth. The dead cub was also albino.

The one and a-half-month cub is being grown with black stripes on white skin instead of the actual black stripes on yellow or light orange colour, said the Zoo Acting Curator and Physician Dr Shahadat Hossain Shuvo.

“Though the cub is yet to be named, it was detected as tigress,” he said.

The curator informed that there is no such white tiger in any zoo or safari park in the country.

The average lifetime of the Bengal Tiger species is 17 years to 20 years. Two months after birth is risky period for the tiger cubs, said Shuvo.

“We would take extra care of the tigress up to six months and it would not be put on display for visitors during this period,” he said.

“We would also try to breed the white tigress with tigers from neighbouring countries for increasing its numbers,” said the curator.

Eminent Zoologist Professor Ghazi SM Asmat of Chittagong University told the daily sun that tigresses give birth of albino due to some genetic problem during breeding. “The white tigers are seen at zoos in different countries including India,” said the professor.

It is a great opportunity for the Chittagong Zoo and hopefully the animal would attract more visitors, said the zoologist urging the Zoo authority for taking measures to increase number of the white tiger.

Mentionable, 11 and nine-month-old tiger and tigress named as Raj and Pori were brought for the Zoo from the South Africa at a cost of Tk 33 lakh on December 9 in 2016. They gave birth to the cubs.

The Zoo now having over 150 birds and animals started its journey on February 28 in 1989.