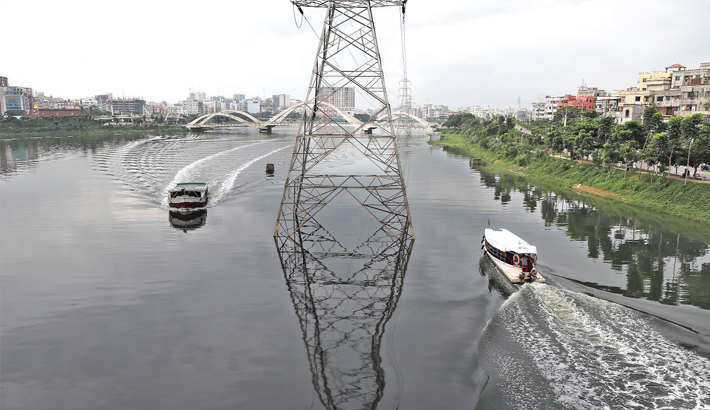 The water of Hatirjheel lake in the capital turns pitch-black due to heavy pollution and indiscriminate dumping of waste from nearby areas. —sun Photo

Rajdhani Unnayan Kartripakkha (RAJUK) has undertaken an initiative to purify polluted water of Hatirjheel Lake so that it becomes more attractive to city dwellers.

The government spent a lot of money to beautify the lake, but water pollution still remains a major concern there due to non-stop falling of liquid and solid waste into the lake.

The initiative has been undertaken as Hatirjheel Lake is losing its attraction due to its black water from where bad odour is emitted.

RAJUK has undertaken a Tk 49 crore project to purify polluted water of Hatirjheel Lake after it examined water from its different spots at laboratories in Japan and Australia, official sources said.

The laboratory reports suggest that presently Hatirjheel water pollution reached at an ‘unacceptable’ level and it is not conducive to biodiversity and poses risk to ecological balance.

An affordable, low-cost and sustainable action plan has been undertaken and the scheme is expected to be completed by this year, according to RAJUK officials.

The combined purification process, prepared by an Australian consultant firm, includes high-powered compressor, installation of air supplying small pipes at the bottom of the lake to raise oxygen level to acceptable level.

Besides, one kind of medicine will be sprayed in lake water from floating boat to purify the same. Water quality will be improved through biological treatment.   Under the project, a consultant will be appointed to prepare details and proper design of water purification process alongside procuring necessary equipment and chemicals.

A warehouse will be constructed and information regarding quality of water will be maintained regularly from the outset of the project.

The main source of water pollution will be stopped with formation of  sediment at a portion located behind Sonargaon hotel.

Moreover, sludge coming from Panthapath box culvert will be pumped out of the lake so that it can not spread in the entire lake.

The lake was created as a storm water retention basin, but its storm water as sewerage lines were not separated. As a result, lake water becomes polluted with sewerage and industrial waste.

Even though Hatirjheel beautification project was undertaken to make it an amusement spot for city dwellers, but it could not fulfill their expectations due to water pollution.

It is also creating problems for people living in the adjacent areas and foreigners coming to nearby Sonargaon hotel.