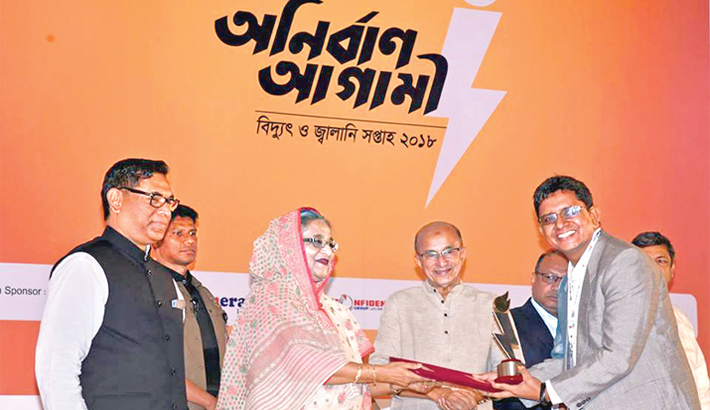 Daily Sun Special Correspondent Md Shamim Jahangir has been adjudged one of the best power and energy reporters for his objective reporting in the field.

He shared the best power and energy reporter award with staff reporter of daily Amader Shomoy Lutfor Rahman Kakon in the print media category. Chief Executive Editor of ATN News Munni Saha got the award in the electronic media category.

Prime Minister Sheikh Hasina handed over a crest and a certificate to each awardee at the inaugural ceremony of the Power and Energy week 2018 at International Convention City Bashundhara (ICCB) in the capital on Thursday.

BPDB got the award in recognition of its role in restructuring the power sector while BREB secured the recognition for fastest power distribution coverage across the country. NWPGCL was recognised for its contribution to smooth power generation, BGFCL for gas exploration and GTCL got the award for their tremendous role in gas distribution.

In the private sector category, Summit Group has been awarded the best power generating company for its fastest establishment of a 300-MW power plant in Gazipur only in nine months.

United Power also got the same award in recognition of its fastest implemented power plant in marginal area.

Besides, Chevron Bangladesh secured the award as the largest natural gas producer of the country under private sector.

Daily Sun special correspondent Shamim Jahangir has been engaged in power and energy reporting over a decade of his 18-year journalism career.