Is Bibhishan in Ramayan really an enemy inside? 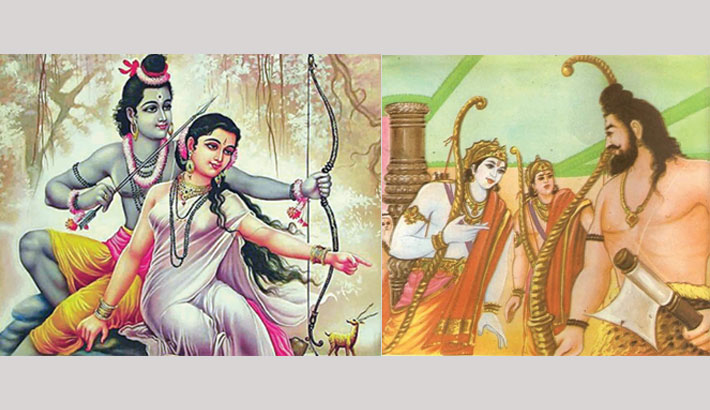 There is a popular proverb in Bengali ‘Ghorer Shatru Bibhishan’  (meaning; Bibhishan is the enemy inside home). Who is this Bibhishan and

why and how this proverb has been originated? Why he is called an enemy inside home or a domestic enemy? In fact, Bibhishan is an important character in Ramayan, the first Indian epic. He was the youngest son of sage Visrava (father) and Kaikesi (mother), brother of Ravan, the demon King of Lanka, Kumbhukarna, another brother and Surpanakha, the only sister. Though born in a demon race, Bibhishan was a person of noble character and pure mind and he had the qualities of a Brahmin.

At early age the three brothers (Ravan, Kumbhukarna and Bibhishan himself) performed severe penance. Being satisfied with them when Brahma (God the creator) asked them to choose boons, Bibhishan prayed for the ability to retain sense of righteousness, power to follow the way of morality, courage to stay on the track of truth and strength to remain in the line of justice and goodness even amid utmost adversity and sufferings. At the same time, he did not forget to pray for the Brahmastra as he was a member of royal family who had to fight against enemies at different times as a part of kingly duties.

Being immensely pleased was with the greedless mind of Bibhishan, Brahma granted all his prayers and in addition to those he granted immortality for Bibhishan. Defeating Kuber in the war Ravan established his capital at Lanka and since then Bibhishan and Kumbhukarna started living with Ravan, their elder brother, at Lanka.

Bibhishan is commonly known as a renegade who left his brother Ravan’s side and joined Ram, informed Ram of the secrets of Ravan and Indrajit (son of Ravan) which paved the way of the fall of Lanka and death of Ravan and Indrajit. Mainly for this reason, he is called an enemy inside and also a traitor but that is merely a superficial concept because there are other facts below the surface which require analysis to get a clear idea about Bibhishan.

Ravan had the habit of kidnapping beautiful women and keeping them in his palace.

Being dissatisfied with Ravan’s this type of wicked activity, once Bibhishan advised him to stay away from such misdeed. At one stage, being informed by Surpanakha (Ravan’s sister) Ravan was attracted to Sita, the heroine of Ramayan. Surpanakha appeared in front of the cottage of Sita in the Forest of Panchavati but her nose and ears were cut by Laxman who was always in charge of protecting Sita. Surpanakha reported it to Khar, his brother (cousin). A war occurred between Khar and Ram but finally Khar and his army was eliminated by Ram (Aranya Kanda, chapter 20-30).

Being instigated by Surpanakha and to fulfil his ill-intention Ravan sought the help of Mareech, another demon who could change his physical shape. Though a demon but as the uncle of Ravan he asked Ravan not to do such an unethical work. Time and again he tried his best to dissuade Ravan but failed and under compulsion he appeared before the hut of Ram in the forest of Panchavati in the form of a Swarna Mriga, a golden deer (Aranya Kanda, chapter 34-42). After playing a number of tricks through Mareech, Ravan succeeded in abducting Sita in the disguise of ahermit (Aranya Kanda, chapter 43-49) and carrying her on his Pushpak Rath (the flying chariot) Ravan captivated Sita in the Forest of Ashoke (present location, as believed, is Hakgala Botanical Garden in Sri Lanka).

not for the reason that the leaf of grass was so powerful a barrier but there was another cause. In Ramayan poet Valmiki informs us that there was a curse on Ravan that in case of any further attempt to rape any woman, Ravan would be killed automatically though Sita did not know it and got escaped.

When Hanuman destroyed the Ashoke Forest, Ravan sent many of his warriors to capture Hanuman but Hanuman killed all of them. Then Ravan sent his elder son Indrajit who captured Hanuman by using Brahmasthra. Hanuman was more intelligent and made himself free using his boon but cleverly submitted himself to the demons and was brought at the court of Ravan.

Becoming angry Ravan declared capital punishment to Hanuman but Vibhishana pointed out that such punishment couldn’t be given to an emissary. Ravan reluctantly agreed with Bibhishan but as an alternative ordered the demons to set fire to the tail of Hanuman. Sita came to know this from female demons who were guarding her and prayed to Agnidev (God of fire ) to save Hanuman.

Agnidev responded to her prayer and unburnt Hanuman escaped from the clutches of the demons.

Feeling insulted and being enraged Ravan called his ministers in an emergency meeting to take revenge on Hanuman. In this assembly extraordinarily strong Suryasatru, Suptaghna, Yajakopa, Mahaparsva and Mahodara, the unconquerable demons Agniketu and Rasmiketu, valiant Indrajit (son of Ravan, his another name was Arindam (a person who is never subdued by enemies), Prahasta, Birupaksha, Bajradamstra, Dhumarksha, Atikaya and Durmukh were present with their iron clubs, sharp edged spears, spikes, darts, javelins, axes, bows with excellent arrows and shining swords. All of them opined for war against Ram (Juddha Kanda, chapter 1-7) and being reinforced by them Ravan decided to start the war but Bibhishan expressed his dissent.

Saluting all of them with hands folded he requested them to sit again quietly keeping arms down and addressing them as dear brothers started saying, “ Wise men have taught us that what cannot be accomplished by three well known strategies viz. conciliation, gift and show of dissention, only then it can be performed by exhibiting physical power. You can attack anyone if you are already attacked by him. No offence was done by Ram to demons but his wife was abducted. Khar crossed his limits and was killed by Ram in an encounter. Any living being has the right to protect his life using his strength. Because of abduction of Sita a very great danger will occur to us. She, who was brought here by force, is to be given back. What is the use in doing anything that ends in animosity? It is not justified to create unnecessary enmity with Ram who is valiant but always righteous. Arrows of Ram will simply destroy our rich City of Lanka, its elephants, horses and many other invaluable treasures. Our valiant demons will also be perished. Before Ram destroys you with his very strong and unfailing arrows equal to the rays of autumnal sun mingled with new heads and shafts, let us stop. Please abandon your anger soon because it destroys happiness and piety and take resort to righteousness which enhances joy and fame ( Juddha Kanda, chapter 9)!” (to be continued)