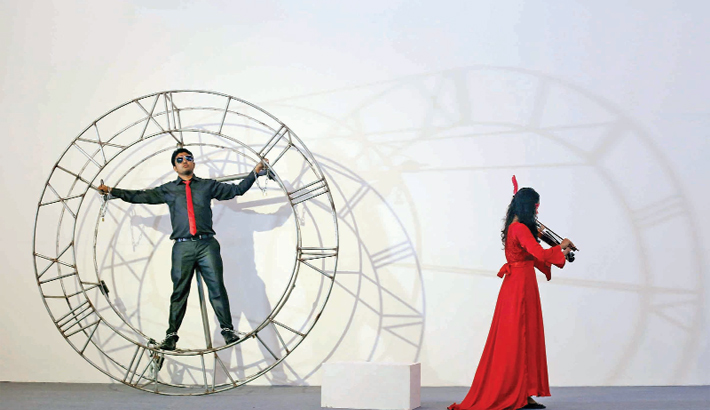 Performance art is a performance presented to an audience within a fine art context, traditionally interdisciplinary. Performance may be scripted or unscripted, random or carefully orchestrated, spontaneous or carefully planned and with or without audience’s participation. The performance can be live or via media. 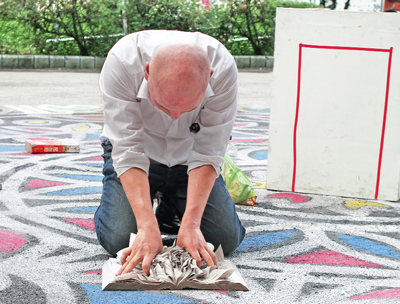 “I can perform in any situation by involving four basic elements: time, space, my body and elements. Performance art makes a relationship between the performers and the audience. Performance art can be presented anywhere, in any type of venue or setting and for any length of time. The actions of an individual or a group at a particular place and in a particular time constitute the work. But, a performance-artist cannot play a role like acting. The artist has to come up with his or her own idea, body and materials,” said artist Marita Bullmann, a participant from Germany.

Besides, Gim Gwang Cheol’s performance titled ‘Romantic Idea’ was really a thought-provoking one, in which he portrayed ‘crush books’ to symbolize the threat of civilization. About his performance the artist said, “Words are heavy and cruel. They dominate the people who don’t know the similar words. So, I believe in communication and contact more than in words. Word is only a means of communication and expression.”

Young Bangladeshi artist Sujon Mahbub presented his performance titled ‘Man, The Slave of Time’, which also had an important theme and interesting elements. His co-artist Jinia Jafran played violin at the performance space and Sujon was fastened with the wheel of time. A circled watch was moving with his hands and legs in the circle. His mouth was tied and eyes were covered with a pair of black sun-glass. He only heard the sound of sublime but the circle of time was unmoved. His performance was nine-hour-long and the circle kept moving around the entire performance space. ‘Man, The Slave of Time’ was largely appreciated by the audience, foreign artists and critics.