Open school offers a ray of hope for street children 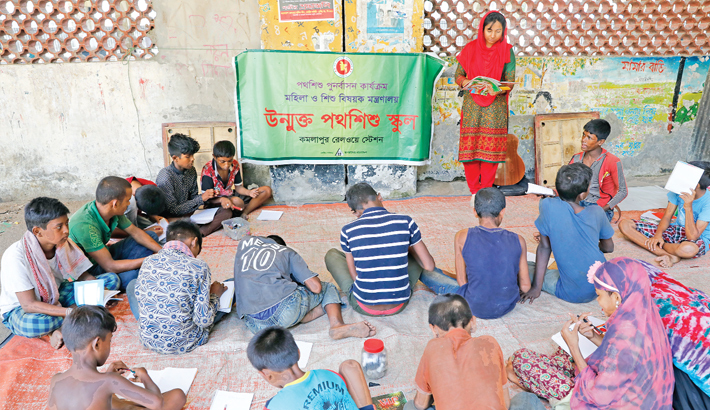 A teacher gives lessons to students at an open school for street children at Kamalapur Railway Station in the city on Wednesday. — Kamrul Islam Ratan

Around 9:00 am on Monday, about 20 street children who work as porters or ragpickers and live in different shelter houses in the capital were chattering at the Narayanganj Terminal of Kamalapur Railway Station.

Some were playing carom, some ludo and some were playing jump rope. Three children were writing something on paper while a female teacher was paying a careful attention to them.

The place is known to locals and the children as open school for street children.

The school has been in operation since June 2016 and is being run under “Street Children Rehabilitation Project” of Women and Children Affairs Ministry in cooperation with Aparajeyo Bangladesh, a non-government organisation.

“We get them to play to hold their attention so that we can motivate them. And gradually we teach them lessons every day on different topics,” schoolteacher Farhana Akhtar said.

She said, “Majority of our students left their houses due to torture by stepmother or poverty.

“They usually take dandy (a kind of drug), cigarettes and other kinds of drugs. We advise them to give up drugs completely.

“They don’t use indecent language with us and comply with our orders.”

Md Towfiqul Islam, another teacher of the school, said, “The children usually stay with us for five to six hours and at least during this period of time they stay away from crimes and drugs.

“We try to rehabilitate the street children and bring them back to normal life. Those who are willing to go to shelter houses are sent there. There are arrangements for food, clothes, housing and education.”

The students of the school are allowed to play different games, including chess, skipping rope, which helps them develop a sense of discipline.

The school provides them with formal and non-formal education, including literary knowledge, morality, counselling and motivation. The school also supplies educational materials to them free of cost.

Mohammad Al Amin aged 14 from Bogra has been staying in Kamalapur Railway Station since he was seven. He studied up to class three at a local primary school of his village. Now he works as a porter of the station.

He lost his father in his childhood. His mother Ful Khatun works as a domestic help, but finds it very hard to maintain her family of two.

“My teachers teach us how to behave, keep away from crimes and drugs,” Al Amin said.

Pathar, 13, who has been a regular student for the last two years, said, “My father is rickshaw-puller while my mother is a domestic worker. Both of them live in the city’s Mohakhali.

“I don’t like to live with them. That’s the reason why I left my home when I was a third grader. Now I study here and earn Tk 200 to Tk 300 daily by carrying passengers’ baggage. I feel really better to study here.”

Another student Faisal from Manikganj, who left his parents two years back, said, “Playing with my peers feels good to me. I also work with them and regularly come to school.