None can foil polls: PM

She says there’s no hurry for use of EVM 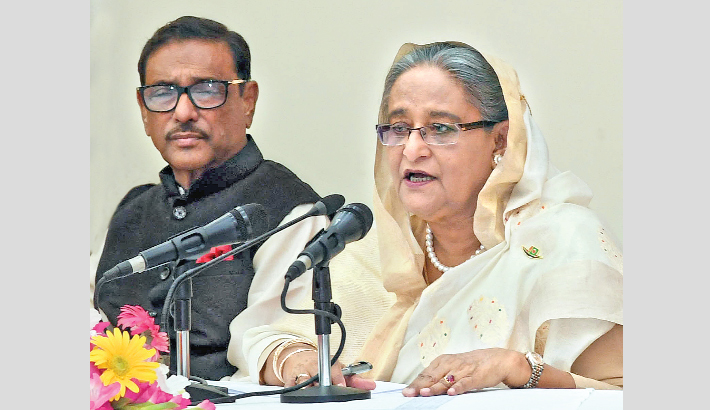 Prime Minister Sheikh Hasina speaks at a press conference organised at her Ganabhaban residence in the capital on Sunday to inform media about the outcome of her recent visit to Nepal for attending the 4th Bimstec summit.

Prime Minister Sheikh Hasina on Sunday said none will be able to foil the next national election.

“Election will be held… Inshallah. If people remain with us, nobody will be able to foil the polls,” she told a press briefing at her official residence Ganabhaban.

BNP, which has remained outside parliament, on Saturday, issued a threat to ‘resist’ elections if its convicted chairperson Khaleda Zia is not freed from jail.

Sheiks Hasina, also the president of the ruling Awami League, said no special step will be taken to bring the BNP in the electoral race.

She said, “Khaleda Zia was not arrested on political grounds. She was arrested on charge of embezzling fund from a trust meant for orphans.”

“It now depends on the decision of that party whether it will participate in the election or not. We won’t’ invite them to join the polls.”

“When I went to her (Khaleda’s) office after the death of her son, the door was shut down. I then decided not to sit with them… So, no discussion will be held,” the premier added.

The AL president said the next national election will be held in a free, fair and credible manner.

“If people cast vote in favour of us, we will come to power again. If they don’t we’ll not be able to.”

“Yet, conspiracies are being hatched and will continue,” Sheikh Hasina added.

“I welcome the political alliance. Let such alliances be forged for contesting the polls together,” she said.

On Kamal Hossain’s doubt about holding of the next national election, Sheikh Hasina asked the lawyer whether he himself wants the polls or not.

“When he (Kamal Hossain) delivered such an inflammatory speech, it is understood that he is ready to fly,” she added.

The AL president expressed her hope of winning the next elections as she has confidence in the people.

“I don’ have any desire. If people want country’s development and welfare, they will make us win by casting votes for the ‘boat’ symbol,” the premier said.

She opined that if AL fails to assume office, people will have to go through tough time.

“I’ll not have any regret if the people don’t want me in office. Being in office, I have worked for the people. There is nothing to do if  people don’t cast votes for me,” she said.

Referring to Khaleda Zia’s imprisonment, the premier said the legal battle continued for 10 years but BNP’s noted lawyers failed to prove her innocence.

BNP’s demand for the release of its chief Khaleda Zia, the premier advised them to set her free through the court or seek clemency to the President.

“If they want her (Khaleda) release, they have to face legal battle or she has to seek presidential clemency for quick release,” she said, adding that the case was not filed by her government rather it was lodged by her (Khaleda) favourite caretaker government led by Fakhruddin Ahmed.

About the Election Commission’s decision to use electronic voting machine (EVM) in the next general elections, the premier said there is no rush for using EVM in the polls. “EVM is a new technology and it is a part of building digital Bangladesh. I am in favor of the device but there is no hurry for using  it,” she said.

The premier also sharply reacted over the BNP’s hard stance against EVM.

“As they (BNP) will not be able to rig the elections, they have been against the device,” she said. The press conference was organised to brief journalists about the outcome of her just-concluded official visit to Nepal.