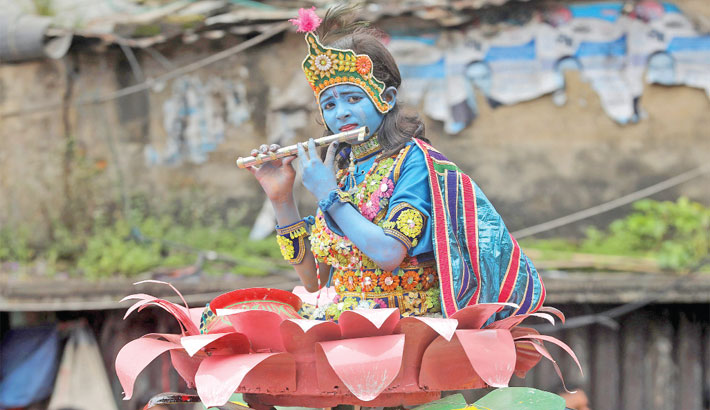 Dressed with garlands of lotus flowers, a child incarnation of Krishna plays flute during a Janmashtami procession in Chattogram on Sunday. - SUN photo

With due religious passion and gaiety, Janmashtami, an annual Hindu festival that marks the birth of Shri Krishna, the eighth avatar of Vishnu, was observed throughout the country on Sunday.

A mangal shovajatra (procession of good wishes) was brought out in the capital marking the occasion.

Before the procession, speakers at a programme said Sri Krishna emerged as a social reformer to defeat the evil forces and to protect religion and good people in society.

They have urged people from all religions to stand against militancy, saying there is no room for radicalism in the secular country. Shailendranath Majumder, president of Mahanagar Sarbajnin Puja Committee, presided over the discussion.

In Bhola, a discussion was also held marking the Janmashtami where Commerce Minister Tofail Ahmed called upon all to be united against evil forces to build a pleasant society.

According to Hindu belief, Lord Vishnu incarnated in the universe as Lord Krishna in the prison of Raja Kangsa on this day, the eighth of “Shukla Pakkha” (bright fortnight) in the month of Bengali calendar Bhadra in Dwapara Yuga in order to protect “Dharma” from the hands of devils.

Sri Krishna was born to Devaki and her husband Vasudeva in Mathura to which Krishna’s parents belonged.