One killed, 22 injured critically; probe body given 7 to 15 days for report 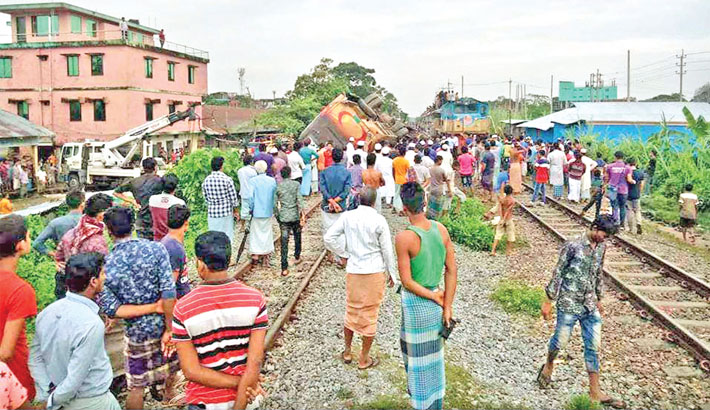 A Chattogram-bound train drags a passenger bus around 500 feet away on Baraiyarhat Level Crossing under Mirsarai upazila in Chattogram on Sunday, leaving one killed and 22 others injured.

CHATTOGRAM: A person was killed and 22 others were injured when a Chattogram-bound train hit a passenger bus at Baraiyarhat Level Crossing under Mirsarai upazila in the district on early Sunday.

Physical conditions of two of the injured were stated to be critical, he said.

Sources said the accident took place at around 4:00am when a Chattogram-bound ‘Bijoy Express’ train from Mymensingh hit a Khagrachhari-bound passenger bus of ‘S Alam Paribahan’ during passing the level crossing at Baraiyarhat.

The gate was opened before arrival of the train, they said.       The accident left 23 persons including the bus driver injured critically, the sources said adding that the train dragged the bus around 500 feet away.

Mirsarai Fire Station Inspector Rabiul Alam told the daily sun that on receiving information they rushed to the spot and rescued the injured from the bus.The injured were sent to local Mastannagar Government Hospital where Sunirmal succumbed to his injuries, he said. Officer-in-Charge (OC) Mustafiz Bhuyian of Government Railway Police (GRP), Chattogram said rail communication of Chattogram with other parts of the country remained suspended for around two hours due to the accident.

General Manager (GM) Syed Faruk Ahmed of the BR (Eastern Zone) told the daily sun that the committee was asked to submit report within next seven to 15 days.

Replying to a question, he said action will be taken if the gateman is found guilty.