Let’s sing a song of the unsung 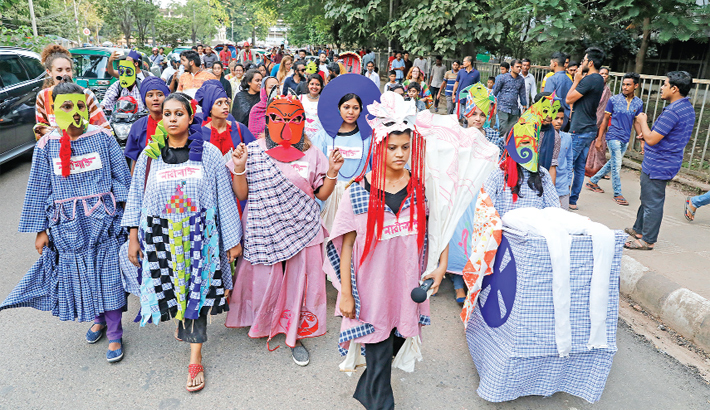 One hundred years of women’s empowerment that began in the United Kingdom (UK) thorough women’s suffrage movement in 1918 was celebrated in the city on Friday.

On the occasion, a theatrical parade was staged which started at Kamalapur Railway Station and ended at Shahbagh.

Peut-Porter, a London based design group, and Paraa staged the theatrical parade showcasing empowerment scenarios in Bangladesh by partnering third and final-year design students of BGMEA-BUFT, Prachyanut, and Shadhona, a Bangladesh-based dance group.

During the parade, 10 exhibitions each having a 20 minute-duration along with 3 short plays on real life stories of women empowerment were staged with the participation of students and working-class women.

Organisers said that the prime objective of the programme is to raise awareness about women’s empowerment.

It is aimed at casting lights on lives and empowerment statuses of one of the economic drivers, readymade garment workers, they said.

“We are celebrating the role of women in Bangladesh marking 100 years of women’s empowerment in London,” said Alex Pollmann, a designer and representative of Peut-Porter.