Bangabandhu Stadium gets ready for SAFF 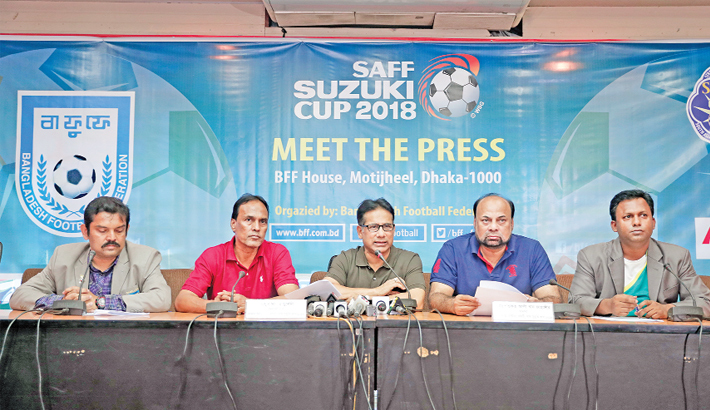 For Bangladesh, SAFF (South Asian Football Federation) Suzuki Cup (formerly known as SAFF Championship) has been the most important tournament in recent years due to heightened rivalry between the regional footballing nations. Keeping it in consideration, Bangladesh Football Federation (BFF) has renovated Bangladesh’s home of football, Bangabandhu National Stadium (BNS) ahead of the tournament of regional supremacy. BFF Senior Vice-president Abdus Salam Murshedy briefed journalists regarding the issue in a press-conference on Friday.

The antiquated lighting system of BNS has long been a roadblock for the venue. Previously installed floodlights were inadequate and inefficient. But now BFF has installed new floodlights which can deliver light in excess of 1000 lumens which is a considerable improvement.

If lighting was the cause of discomfort for spectators, dressing room amenities were the cause of distress for teams. BNS was dreaded by international teams for its underequipped dressing rooms. Since the overhaul of the dressing rooms during the famed Argentina-Nigeria friendly which was held in 2011, no major renovation projects were undertaken until now.

Facilities of the press box have been also improved.

It is also a great opportunity for BFF to inject some much needed life into Dhaka’s football by bringing in some crowd into the stands. BFF has decided to launch a promotional campaign aimed at drawing spectators to the field.

SAFF posters will adorn the whole city. Students from various schools of Dhaka have been invited to see the matches and sticking to tradition, BFF will mike throughout the city using Rickshaw as the platform.

Interested spectators can buy the tickets in advance from BFF office or Dhaka Metropolitan Football League Committee’s office. In addition tickets will be available in the two ticket stalls at BNS.

Tickets sales will start from September 1.

All the matches of SAFF will be telecasted live by Channel 9 as the host broadcaster.

Meanwhile, Sri Lanka became the first team to arrive for SAFF 2018 and have already played an international friendly match against Bangladesh on Wednesday. They landed in Dhaka on August 26. Bhutan and Nepal will reach Dhaka on Monday while India and Maldives will arrive on Tuesday. Pakistan have still not confirmed their date of arrival.