Lest We Forget, The Legacy Of MAG Osmani

“People of Bangladesh are at war! Ours is a national war, in which the entire nation, irrespective of political beliefs, caste or creed stands united as one. Its ideals are high and resolution is hard as steel. We will free Bangladesh from the occupation of the inhuman, Godless enemy totally devoid of all ethics, whatever will be the cost. So, wherever you are in Bangladesh – in the rivulets, lakes, fields, industrial centres, towns and cities, rural markets and remote recesses of the rural interior, on the riverine highways and land routes – strike the enemies with whatever you can find. Strike them hard, destroy them, and obliterate all semblance of their existence. Forward, my countrymen, to protect the lives and honour of our men and women, to secure the future of our citizens whatever be their religion, caste or creed, and to defend the independence of Bangladesh,” this was how Colonel Mohammad Ataul Ghani Osmani, Commander-in-Chief of Bangladesh Armed Forces during the Liberation War, called the mass people of this land to form resistance against the Pakistani occupation army and liberate the country from the clutch of them. MAG Osmani represents an era and his life is a chapter by itself in our national history. He is one of those very few persons, without whose contribution Bengalis’ long cherished dream of achieving an independent country would remain stuck, at least for a few more years. Apart from his vast experience and technical knowledge on war, his guidance and leadership to keep the unity of senior Bengali army officers intact at the time of War of Independence had helped determine our destiny. Albeit he is one of the crucial characters of 1971 war, his contribution is not evaluated properly due to his shocking role in some of the unexpected incidents of post Liberation War Bangladesh and his personal conflict with a number of influential figures. Mohammad Ataul Ghani Osmani was born on September 1, 1918, in Sunamganj. Tomorrow, the nation will remember him on his 100th birth anniversary. On this occasion ‘morning tea’ pays tribute to this great son of the country by recalling his remarkable contributions to the nation.

MAG Osmani was a descendant of Shah Nizamuddin Osmani who came to Sylhet with Hazrat Shah Jalal (R) in 1303 as one of the 360 awlias. Though Osmani’s ancestral home was in Dayamir village in Balaganj, but at the end of the First World War when he was born to Khan Bahadur Mofizur Rahman and Jubeda Khatun, his father was working as a sub-divisional officer in Sunamganj. Osmani was the youngest among the three children of his parents. He had spent his childhood in different places due to his father’s job. His academic education began in Cotton School in Assam’s Guwahati. Following the transfer of his father, Osmani took admission in Sylhet Government High School from where he passed Matriculation examination in 1934 with a first division and obtained ‘Pretoria Award’ for securing the highest marks in English. Then he enrolled at Aligarh Muslim University in Delhi and was elected as the Vice Chairman of Assam Bengal Students’ Union. During his participation in University Officers’ Training Corps (UOTC), Captain Lord Williance, instructor of the course, witnessing his military talent, suggested him to pursue a career in army. Osmani completed his graduation and post-graduation respectively in 1938 and 1939 and passed the examination of Federal Public Service Commission as per his father’s wish. But in July 1939, he joined Territorial Force Battalion as a prospective army cadet, which helped him to be selected by Inter Service Selection Board and later get trained in the Indian Military Academy to become a commissioned officer on October 5, 1940. 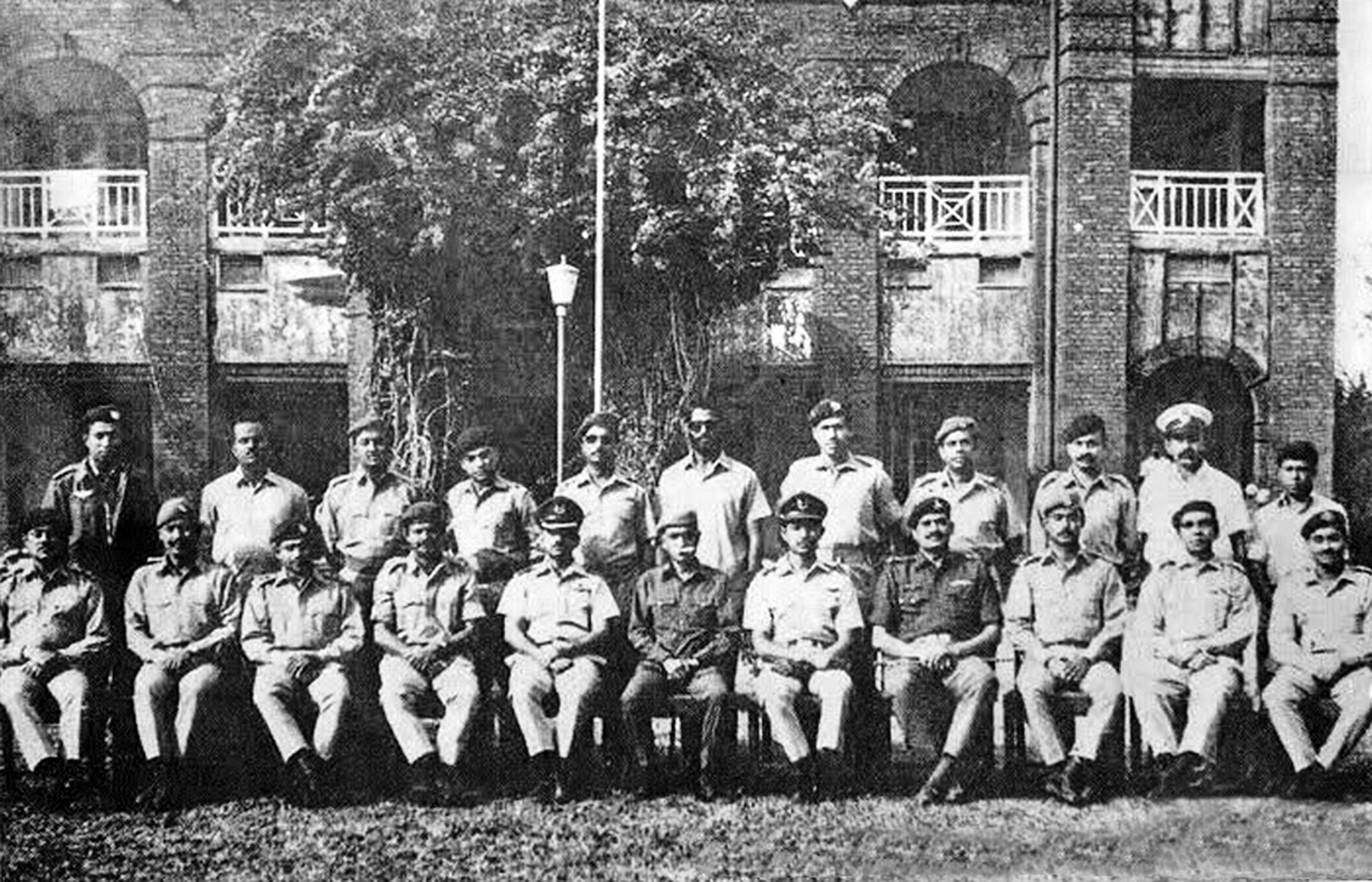 On February 23, 1942, at the age of 23, MAG Osmani became the youngest Major in the British-Indian Army. During the Second World War he fought at the Burma sector. On October 7, 1947, he opted to join the newly formed Pakistan Army and was promoted to the rank of Lieutenant Colonel. The hope with which he joined the Pakistan Army was shattered soon. Osmani realised how the people of East Pakistan were becoming victims of discrimination. Albeit they made up 56% of Pakistan’s total population, they represented only 5% in the army. Because of their ethnic identity Bengali senior officers like Major General Akbar Khan, Major General NAM Raza and Major General Ishfakul Majid were bypassed by Major General Ayub Khan to become the Chief of Staff. Akbar Khan was sentenced to imprisonment in the Rawalpindi Conspiracy Case while Ishfakul Majid was also falsely implicated in it. Osmani had a heated argument with Ayub Khan over the matter.

MAG Osmani was posted as the Commanding Officer of the 1st East Bengal Regiment on November 8, 1951, where he contributed a lot to develop the regiments by recruiting Bengali officers and soldiers. Nicknaming the East Bengal Regiments as the ‘Bengal Tigers’ he began using Bangla language in its official conversation. Osmani selected Kazi Nazrul Islam’s famous song ‘Chol Chol Chol’ as the marching song of the regiments and performed Rabindranath Tagore’s ‘Gram Chara Oi Rangamatir Poth’ and Dwijendralal Roy’s ‘Dhono Dhanno Pushpe Bhora’ with full military band. For his guardianship in the regiments he was affectionately called as ‘Papa Tiger’. He became a deputy director of the East Pakistan Rifles in March 1955 and in 1961 he received the rank of Colonel. He went to the United States in 1964 for a training course on Advanced Modern Weapons. During the Indo-Pak War of 1965, Osmani was sidelined by the West Pakistani generals. He finally retired from the Pakistan Army on February 16, 1967.

Mohammad Ataul Ghani Osmani entered politics through joining Awami League and contested in the 1970’s national election from Biswanath, Balaganj, Golapganj and Fenchuganj constituency. Although he won the poll convincingly but couldn’t serve as a Member of the National Assembly as West Pakistanis didn’t hand over power to the Bengalis. When the political crisis deepened, Awami League formed a secret military advisory team involving Ishfakul Majid and MAG Osmani so that Bengali officers of Pakistan Army can contact them in case of any crisis. Having failed to convince Bangabandhu to escape for avoiding arrest, on the fateful night of March 25, 1971, Osmani and others went underground just before the army crackdown. Two days later he reached Telipara Tea Garden in Sylhet where the 2nd and 4th East Bengal Regiments established a temporary base. He held there a meeting of Bengali army officers on April 4 and began formulating a blueprint to free Bangladesh from Pakistani repression. Mujibnagar Government appointed MAG Osmani as the commander of the Mukti Bahini on April 12 and the Commander-in-Chief of Bangladesh Armed Forces on April 17. 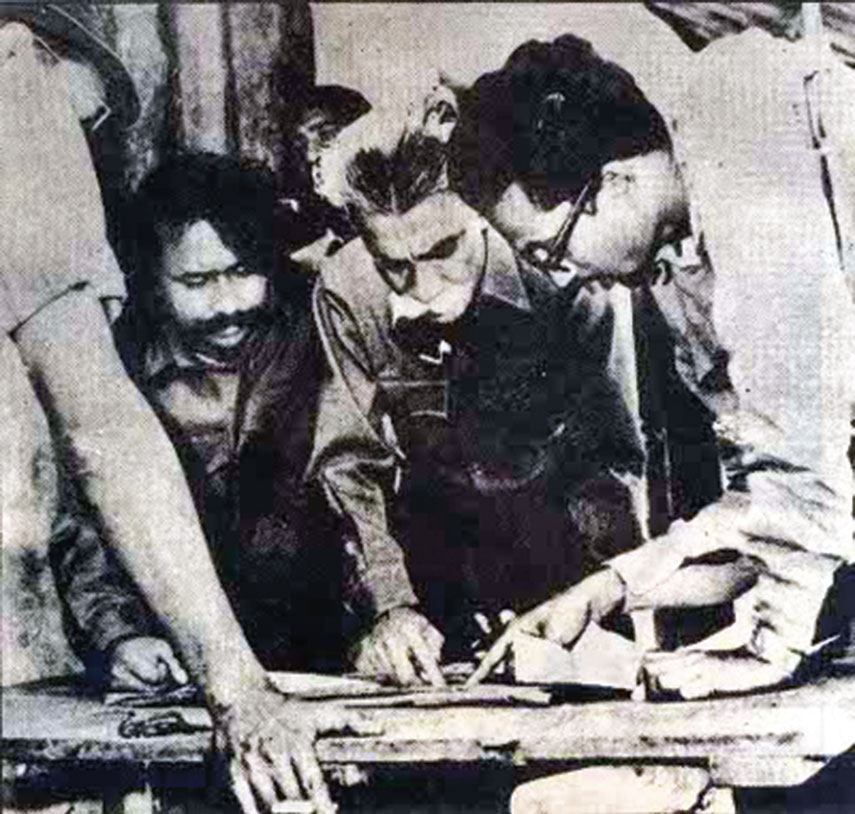 It was a time when Bengali officers and soldiers were scattered and they had no command and communication network at all. MAG Osmani initially tried to gather all of them who were involved in disorganised resistance war in different parts of the country. As he knew that Mukti Bahini cannot combat against a powerful Pakistan Army with a limited number of trained members of various forces, he looked for a large number of civilians who were willing to join the Liberation War after receiving required training. Watching hundreds of thousands of fleeing youths he communicated with the Indian civil and army officials through the Mujibnagar Government to get required place, weapons and other materials for training, and designed an effective structure for Mukhti Bahini. Consequently Bengalis formed a regular force of over 30,000 soldiers and an irregular force of more than 100,000 guerrillas. Dividing whole Bangladesh into 11 separate sectors and shouldering responsibilities to the sector commanders Osmani asked them to take necessary conventional and unconventional war strategies to cope with certain situation. He regularly toured different sectors to boost morale of the freedom fighters. Spirited with the highest level of patriotism his boys bravely fought against the Pakistan Army and achieved victory on December 16, 1971. Osmani was absent in the surrender ceremony owing to a helicopter accident. Well, it is also true that personally he was not interested in attending the programme due to protocol problem.

MAG Osmani arrived in Dhaka on December 22, 1971 and the grateful Bangladesh government promoted him to the rank of four-star general on December 26. He arranged an honour guard to greet Bangabandhu Sheikh Mujibur Rahman on his return to the country on January 10, 1972. On April 12, five days after retiring from the service, Osmani took oath as a Minister of the Awami League government and was made responsible for running the Ministries of Shipping, Inland Water Transport and Aviation. In the first general election of independent Bangladesh in 1973, Osmani was elected a Member of Parliament and he took oath again as a cabinet minister with charge of the Ministries of Post, Telegraph and Telephone, Communication, Shipping, Inland Water Transport and Aviation. In May 1974, he resigned from the cabinet and later from the parliament opposing ‘controversial’ BAKSAL system of government. Two weeks after the brutal assassination of Bangabandhu and most of his family members on August 29, 1975, General Osmani joined the illegal government led by Khandaker Moshtaque Ahmed as an Adviser of Defense Affairs to the President, which is considered by many as a ‘betrayal’ with the founding principles of Bangladesh. In May 1976, he launched ‘Jubeda Khatun-Khan Bahahdur Mofizur Rahman Trust’ and in August 1977, he established ‘Osmani Memorial Trust’ and donated all his assets, including his parental home Nur Manzil, for the well-being of underprivileged people. He founded Jatiyo Janata Party on September 5, 1976, and contested two Presidential Elections held respectively in 1978 and 1981. In 1983, Osmani was diagnosed with cancer and immediately flown to London for treatment but couldn’t recover and died on February 16, 1984, at the age of 66.

In terms of longevity, Osmani lived a short life. He was not a successful politician but his role during the nine months of the Liberation War was seminal. It was to him that the Mujibnagar Government had turned for a shaping of guerrilla strategy. Osmani gathered the finest of Bengali officers and soldiers around him to help devise the means of implementing a people’s war. Only four years into retirement from the Pakistan Army, an establishment that would not let him rise above the rank of colonel, Osmani had before him, in 1971, the onerous job of defeating the same force in battle.

Despite his momentous contributions there is an attempt to make Mohammad Ataul Ghani Osmani irrelevant and remove him from the canvas of our liberation struggle. He is increasingly sidelined by Bangladesh Awami League for his involvement with the Moshtaque government and he is often ignored by Bangladesh Nationalist Party (BNP) as he never liked its founder Ziaur Rahman and he challenged him as the presidential candidate of the combined opposition in 1978. Unfortunately while narrating history our political parties create their own version that only reflects our narrow political culture and never allows those individuals who regardless of some flaws played decisive role in our national history. No matter who tries to evaporate him and his contributions, with his hauteur, gruff voice and daunting moustache General Osmani will always be remembered as the Commander-in-Chief of the Bangladesh Armed Forces who put his best efforts when this nation needed it most.