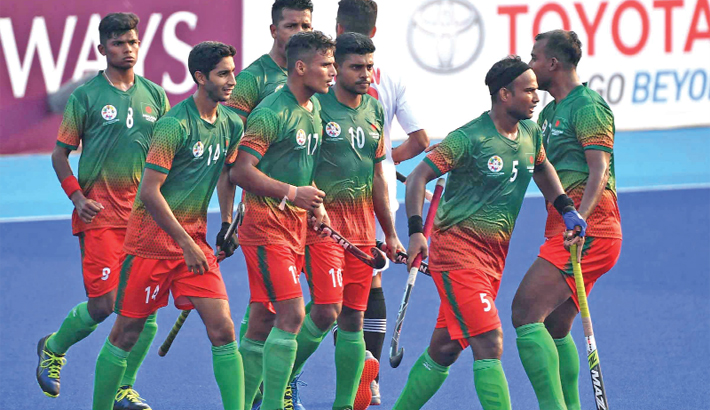 Bangladesh overcame Oman due to the excellence of Mohammad Arshad and Ashraful Islam in the Pool-B match of the tournament.

For Bangladesh, the encounter against Oman was nothing short of final, as men in red and green’s primary target was to confirm final 6 and a defeat against Oman would mean immediate knock-out from the competition.

Bangladesh went on the offence from the start of the play and attacked Oman defence from every possible corner. Success came fast as Bangladesh led the first quarter by 1-0 goal with forward Hossain Mohammad Arshad’s exquisite field goal in the 14th minute.

Oman came back strongly in the match and equalised the scoreline as Ammaar Juma Salim Al-Shaaibi scored the all-important goal from a penalty corner in the 23rd minute.

But the boys did not get demoralised and went on counter-attack and broke through Oman’s ranks moments later on the 28th minute took the lead once again.

Bangladesh defender Ashraful Islam scored the winning one from a penalty corner making the margin 2-1.

Jimmy-Chayan led Bangladesh held their nerves in the next two-quarters for a successful start in the six-team Pool and to collect full three points.

Both the teams had ten shots while five shots on target with 5 penalty corners. This stat reflects the competitive nature of the encounter.

Bangladesh head coach Iman Gobinathan Krishnamurthy has been credited for bringing in young players who have changed the face of Bangladesh hockey. This win makes Bangladesh’s chances of finishing at least sixth bright as they will take on higher-ranked Malaysia, Pakistan as well as minnows Thailand and Kazakhstan in the remaining group matches.

Earlier, in the day’s another Pool-B match, Pakistan crushed Thailand by 10-0 goals to lead the points table.

In their remaining Pool matches, Bangladesh will play Kazakhstan, Malaysia, Thailand, and Pakistan on August 22, 24, 26 and 28.

With this win, Bangladesh also avenged their 0-2 defeat against Oman in the Asian Games Qualifiers earlier this year.

Iman Gobinathan Krishnamurthy’s boys had a good preparation ahead of Asian Games as they did their camp at South Korea upon the invitation of Korean Hockey Association.

The men in red and green played five warm-up matches against South Korea National Hockey Team during the tour. Of these five matches, Bangladesh were able to draw the fourth match while losing the rest of the matches.

However, in the last Asian Games, Bangladesh finished 8th conceding a 2-3 defeat against Oman in the place-deciding match in Incheon, South Korea 2014.