People should learn from Bangabandhu’s life 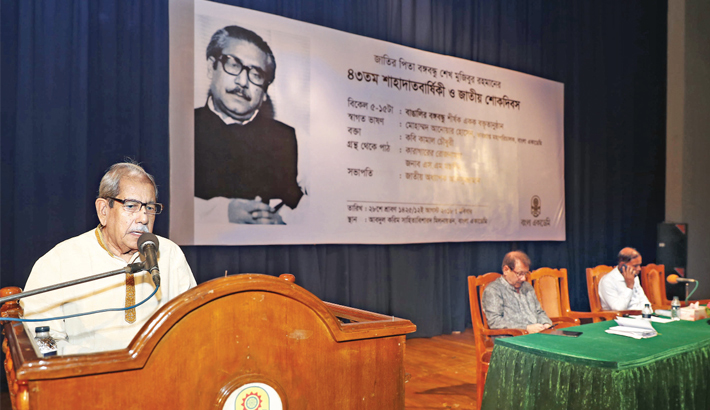 Speakers at a seminar on Sunday said people can learn many things of politics from the life of great leader Father of the Nation Bangabandhu Sheikh Mujibur Rahman as he sacrificed his whole life for the people of Bangladesh.

It is high time for taking a fresh vow to materialize the dream of Bangabandhu to build a “Sonar Bangla”, the speakers said while speaking at a ceremony titled ‘Bangalir Bangabandhu’ held at Bangla Academy in the capital on Sunday evening.

Bangla Academy organised the programme on the occasion of 43th martyrdom anniversary of Father of the Nation Bangabandhu Sheikh Mujibur Rahman.

Kamal Chowdhury said “Bangabandhu had become a single symbol in the field of struggle to establish the Bangali nation state and it is a greatest achievement of Bangabandhu.

Terming Bangabandhu as the architect of the nation, Prof Anisuzzman said Bangladesh got independence in an uneven war under the leadership of the Bangabandhu.

He also said “It is not possible to erase his contribution to the history of Bangladesh.”

The speakers also called for grooming up the future generation with the ideals of the great leader so that they could turn themselves into worthy citizens of the country.