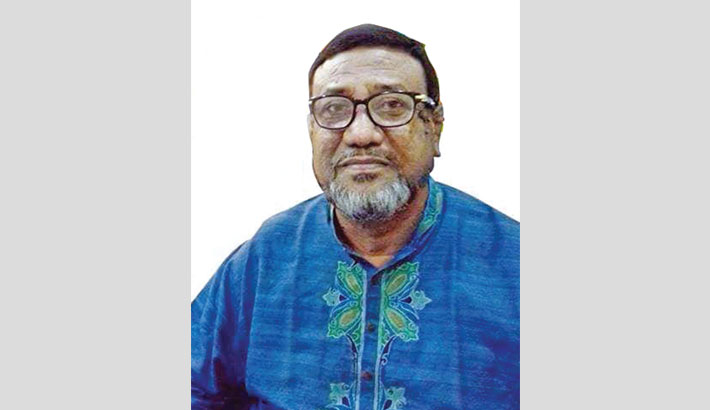 “This nation will remain the land of the free only so long as it’s the home of the brave.” – Elmer Davis

Freedom fighters are brave and true; Freedom fighters, we salute you; Freedom fighters, I want you to know, Bangladesh truly loves you so much. During our war with Pakistan in 1971, I stood and watched as a mother cried, when she had heard that her son had died. He didn't die because he was sick, or he didn't die because he was in a wreck. He died doing what he felt was right for his motherland. I watched a father try to hold back his tears; his son had lived only a scant 19 years. His son had died two hundred miles away, and what was there left for a father to say? He got down on his knees and said a prayer; his brave son knows his father did care. I stood and watched as a little girl cried.  She didn't understand why her brother had passed on; why he never again played with her on the lawn.  Looking at the little girl's tears I knew, that her big brother died fighting for us all.

Bangladesh is a land of the braves. There are icons of Bangladesh’s struggle and freedom movements whose legacies have refused to leave even after their death and mention may be made of such great political leaders and statesmen like Bangabandhu Sheikh Mujibur Rahman, Tajuddin Ahmad, Syed Nazrul Islam, Maulana Bhasani, Comrade Moni Singh, Prof Muzaffar Ahmed and many more. Across the world, Bangladesh has come a long way with regard to fighting for independence, economic freedom and democracy. In this quest, all these great leaders stood-out and are celebrated as the icons of many revolutions and revolutionary movements that happened on the Bangladesh’s world.

Many intellectuals and political icons have led and given their lives to this struggle, but the legacies of some have refused to die despite death at a relatively young age. Their ideals laid the foundation for the economic and political progress to establish Bangladesh. Freedom is never more than one generation away from extinction. We didn’t pass it to our children in the blood stream. It must be fought for, protected and handed on for them to do the same, or one day we will spend our sunset telling our children and our children’s children what is was like in the United States where men where free. Jashim like bright, brave, incredibly fit and remarkably talented Bangladesh’s Freedom Fighters who fought chivalrously during our Liberation War with Pakistan in 1971 to attain Bangladesh.

Veteran Freedom Fighter AKM Jashim Uddin is a firm believer in Bangladesh’s liberation and in Bangabandhu’s ideals of politics. These ideals have led him to go to the battle field in our glorious Liberation War in 1971 to establish Bangladesh at a young age. The legacies and dreams of Bangabandhu Mujib and his unfeigned lieutenants shall remain a goal among many like FF Jashim for years to come. He is a leader who knows the way, goes the way, and shows the way. We expect the change is near and with every day passing, we are getting one step closer to achieving our ground that we laid in 1971 in our war with Pakistan. As we continue to strive hard to see a better tomorrow, we can, in the meantime, celebrate the contributions rendered by our valiant Freedom Fighters to the just cause of establishing Bangladesh in 1971.

I was there in the battle field. I saw our brothers and friends how they worked, fought, and lived. I saw some of them die. I saw more courage in the face of discomfort, more love in in times of need and more devotion to duty than could exist under tyranny of Pakistani armed forces. Bangladesh symbolises freedom. We should honour those that fought for our freedom so valiantly. Without our veteran Freedom Fighters, we wouldn't have one of the greatest gifts in life freedom. Thanks for their bravery and sacrifices. Jashim Uddin is one of the young leaders of a Freedom Fighter’s group in Gulshan, Banani and Mohakhali areas of our Metropolitan City, Dhaka during our war with the occupation military forces of Pakistan in 1971. He played a courageous role in the struggle for Bangladesh’s independence. He also continued to fight the counter-revolutionaries and the anti-liberation forces in the new established country. He is unrelenting in his quest for the extermination of all signs of the anti-liberation forces in the country.

FF Jashim was born and brought up in the Mohakhali area, Dhaka. He has been an honest politician throughout his life. Currently, he is the President of Banani P.S. Awami League, Dhaka Metropolitan City North and President of the governing body of IPH School & College, Mohakhali, Dhaka. Last 7th July 2018 was his 69th Birth Day and a grand reception was given to him by the IPH School & College authority on the same afternoon at its campus to commemorate his contributions to our Liberation War and the social works he has been performing since long for betterment of our children’s education and greater well-being of people of the areas wherefrom he has risen to the present position and where he is highly regarded as a proud son of the soil. He knows me for a long time; and he is senior to me by about 5 years in age. I was an invitee to embellish this august occasion.

This bright function was decorated with so many veteran Freedom Fighters. Jashim asked me to come to the dais to take a seat along with them and then he introduced me to all FFs and other dignitaries assembled there in a very proud tone. I passed amongst them for a few hours and felt very proud of FF Jashim and other valiant Freedom Fighters around me. It was a rare and memorable moment after a very long pause time in my life. All FFs came to greet their co-FF Jashim with lots of bouquets for him. Jashim has always been a very good public speaker. On his 69th Birth Day, he spoke eloquently with a spirited tone; thanked everybody present there, recalled their great services to free Bangladesh from the cruel clutches of Pakistan’s army and their impish local cohorts. He urged upon all to build Bangladesh in the light and spirit of our glorious Liberation War in 1971 and following the ideals of our Founding Father – Bangabandhu Mujib, in an altruistic manner. His public support and popularity have been growing because of his power of love and patriotism for the country and its people. Lao Tzu said, “To lead people, walk behind them” and FF Jashim is no exception to these wise words.  The best leaders are readers of people. He has the intuitive ability to understand others by discerning how they feel and recognising what they sense.

We know Bangladesh has a long and very rich history. Several cultures and communities live side by side and even together in the country, each with their own stories and background. All of these have produced amazing leaders who have been influenced and contributed to the people, history and country as it is today. Some of them were good leaders, others even great. But there have also been leaders who abused their power and did not serve in the public interest and who failed to follow the ideals for which we have established Bangladesh in what makes a good leader! It is important to know who at least some of these leaders were and how they shaped our country and its people. They were not only the big leaders and they might also have been the people who led people to make a difference.

There have been many leaders from across the globe who have been important to many people. Some of them fought for their and others' rights, some helped those who needed love and care. Other leaders have helped to turn the world into the place it is today. Jashim is a leader who has always been caring for his people and has earned their respect for the good deeds he has been doing since long. He has helped to change the way his people have been treated.

All good leaders are connectors. They relate well and make people feel confident about themselves and their leader. Jashim Uddin also has been an example of a Freedom Fighter who has become a good and honest politician of the country. He is a FF having or displaying great dignity or nobility; an unflinching fighter in battle or action; and he has become a whole person in politics to bring about people’s welfare. Jashim is always humble. He is a freedom fighter who learns the hard way that it is the oppressor who defines the nature of the struggle, and the oppressed is often left no recourse but to use methods that mirror those of the oppressor. At a point, one can only fight fire with fire.

Jashim can tackle challenges. In the end, people are persuaded not by what we say, but by what they understand and he can understand the pulse of people for whom he has been doing politics. Leaders who fail to prune their pride will meet demise. That's not a guess, it is a guarantee. FF Jashim Uddin can clearly fathom it. To remain a credible leader, he must always work first, hardest, and longest on changing himself. This is neither easy nor natural, but it is essential. He understands it well.

The Freedom Fighters are our brothers, these freedom fighters.... They are the moral equal of our great leaders and the brave men and women of the Pakistani resistance. We cannot turn away from them, for the struggle here was not right versus left; it was right versus wrong. To a freedom fighter hope is what a lifebelt is to a swimmer - a guarantee that one will keep afloat and free from danger. FF AKM Jashim Uddin knows well that fear will give you fight; fight will give you freedom, and so, dive in and swim. He is like the words of Mahatma Gandhi “Do or die.” Long live FF Jashim Uddin in good health and in good spirits to serve people of Bangladesh with his honesty and dedication. This country has seen and known the true level of sacrifice of our veterans. I owe a collectible debt to all our FFs. Every generation has proved itself to be worthy to stand up to the precedent of the greatest generation. Going back to the war in 1971 Bangladesh’s FFs have been the best in the world. Let’s all take a remembrance for all veterans who served wartime and went or still with us. May God Bless All Veterans of our 1971 War.

The writer is a senior citizen.