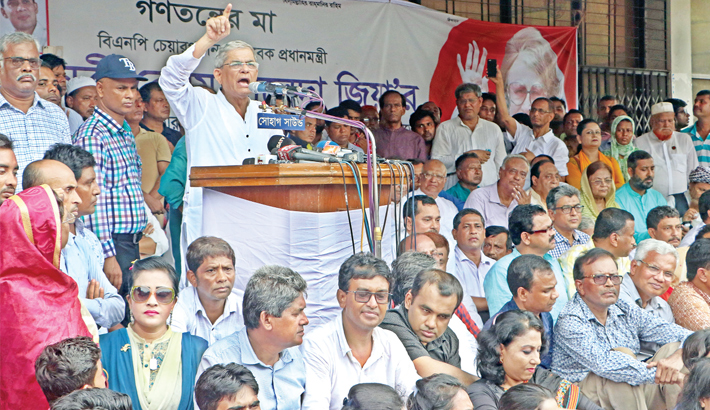 BNP secretary general Mirza Fakhrul Islam Alamgir speaks at a token hunger strike programme at Mohanagar Natya Mancha in the capital on Monday protesting the Supreme Court order upholding its stay on bail granted by the High Court to Khaleda Zia in a murder case filed in Cumilla. - SUN PHOTO

“We demand her immediate release from jail and her better treatment,” he said. He came up with the statements at a token hunger strike at Mahanagar Natya Mancha in the capital on Monday, demanding Khaleda Zia’s immediate release.

Leaders and activists of BNP and its associate bodies and 20-party alliance attended the programme. Besides, similar programmes were also observed at different district towns throughout the country.

Mirza Fakhrul demanded formation of neutral government for the next parliamentary polls, reconstitution of the election commission, dissolution of parliament and deployment of army before the polls.

And this will pave the way for a congenial atmosphere for the general election, he added. Alleging that Khaleda Zia is not receiving proper treatment in jail, the BNP leader said the government is hatching a conspiracy to keep Khaleda as well as BNP away from politics and election.

Speaking at the programme, BNP standing committee member Khandaker Mosharraf Hossain alleged that the government is plotting to hold another ‘farcical election leaving out 20-party alliance like on January 5, 2014’.