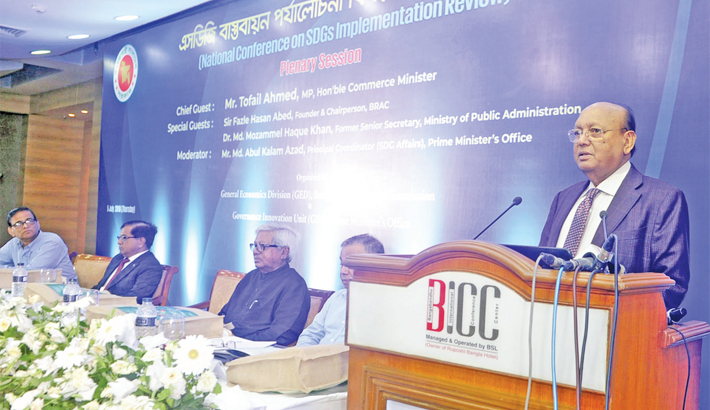 Commerce Minister Tofail Ahmed speaks at a national conference on SDGs Implementation Review at Bangabandhu International Conference Centre in the capital on Thursday.

The urgency for removing extreme poverty from the country was highlighted when experts at a conference on Thursday reviewed the country’s progress toward achieving the Sustainable Development Goals SDGs.

They suggested for putting the “extreme poverty” issue on top priority for successful implementation of 2030 global development agenda.

They came up with the suggestions while speaking at a session of ongoing three-day national conference on SDGs Implementation Review (SIR) in the capital on Thursday.

“Prioritise ‘extreme poverty in the country’ in course of SDGs implementation as still now about 20 million of the country’s population are extremely poor who need to be brought out of the poverty,” said Brac Chairperson Sir Fazle Hasan Abed. But cutting extreme poverty requires determination and collaboration, he pointed out.

Speakers at the conference also came up with a set of suggestions including ensuring quality education and healthcare services, which they think would help the country in facing SDGs implementation challenges.

According to them, the country should now think about a shift from the provision of “basic services to quality services” for ensuring better livelihood to the country people. They also suggested allocating more money to ensure quality healthcare service, especially for lowering maternal mortality and morbidity rate, which is a crucial goal of SDGs.

Some of the speakers repented that even though much has been done in the country to improve education sector, ensuring quality of education still at large. They said that school rooms built for rendering pre-primary education are not suitable for imparting elementary education to the young minds.

According to them, remittance inflow is on the rise, but it is still far behind meeting the SDGs financing needs. “Skill profile of the wage earners needs to be changed in order to meet the challenges,” they pointed out.

In face of falling growth of local RMG sector and falling jobs in the sector due to introduction of new technology, they said serious attention is needed for export diversification beyond RMG sector. He said jute items should also be diversified.

The noted social worker Abed also thinks that the Rohingya crisis should draw special focus both from the local policymakers and the global leaders so that the crisis does not stand in the way of SDGs implementation.

“Besides other aspects, Rohingya crisis is an economic burden that the world needs to share,” he said, adding that Bangladesh can be offered some trade benefits like some other country to recoup the economic losses. Apart from government initiatives, NGOs have a large role to play to achieve shared goal of prosperity in line with the 2030 development agenda, he also noted.

Speaking on the occasion, Commerce Minister Tofail Ahmed said Bangladesh is on the right track to meet SDGs. “I firmly believe that we must be successful in achieving SDGs as we’ve shown success in achieving most of the MDGs,” he said.

He added that on most of the social indicators, the country is well ahead of neighbouring India and Pakistan, while it is clearly ahead of Pakistan on some key economic indicators although it started from nearly zero after the Liberation War.