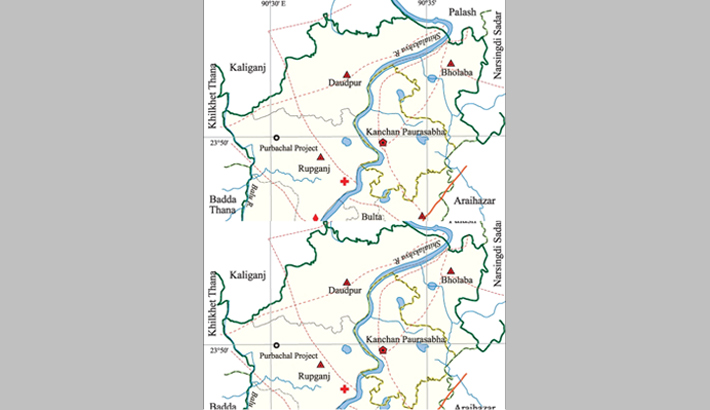 Rupganj Upazila (Narayanganj district) area 176.16 sq km, located in between 23°42’ and 23°54’ north latitudes and in between 90°28’ and 90°37’ east longitudes. It is bounded by Kaliganj (Gazipur) and Palash upazilas on the north, Sonargaon upazila on the south, Araihazar and Narsingdi Sadar upazilas on the east, Demra, Khilgaon, Badda and khIlkhet thanas on the west.

Administration Rupganj Thana was turned into an upazila in 1983.

History of the War of Liberation In 1971 the Pak army conducted mass killing and plundering; they also set many houses of the upazila on fire. On 21 November, an encounter was held between the freedom fighters and the Pak army at Bholaba in which one freedom fighter named Bakul was killed. In his memory, Rupasi Kanchan Road has been renamed as Shahid Bakul Road.

Marks of the War of Liberation Memorial monument 2.

Natural resources Natural gas has been detected at Kanta of this upazila.