From Bangladesh with Love 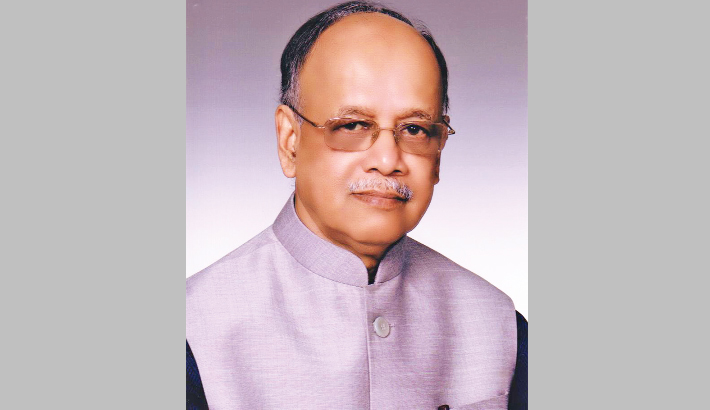 Being a member of Prime Minister Sk. Hasina’s entourage during her overseas or foreign visit is not only an honour but also a chance to look into the tireless work style of the Prime Minister. Once someone have been with her (just not her personal staff) they will surely know why she is known as a workaholic by her colleagues. I had the privilege of travelling with her on two different occasions, once to Japan and the second one recently to India (West Bengal) where she travelled to inaugurate the Bangladesh Bhavan at Visva-Bharati University at Santiniketan in West Bengal along with Indian Prime Minister Narendra Modi and to receive an honorary D. Lit degree from Kazi Nazrul Islam University at Asansol. The first one was scheduled to be preceded by the annual Convocation of Visva-Bharati and for the second we had to travel to Asansol via Durgapur. There is a small domestic airport at Andol of Durgapur which has recently been named after the Rebel Poet Kazi Nazrul Islam. The airport usually handles one flight a day from Delhi and the special flight of Bangladesh Biman carrying Bangladesh’s Prime Minister and her thirty member delegation along with senior staff of the Bangladesh Foreign Office and the Ministry of Education would be the first foreign airlines to have touched down at this airport. 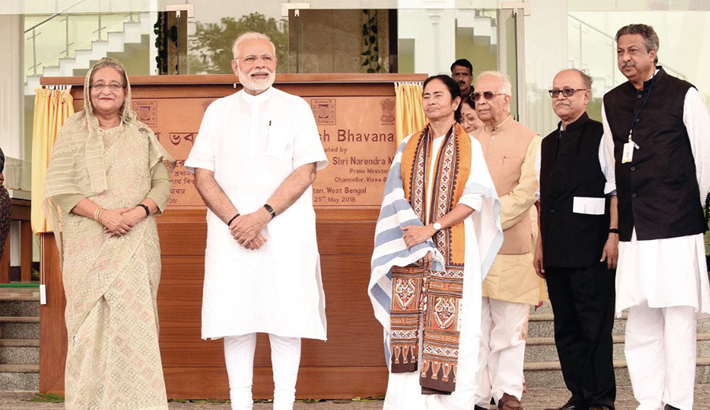 Members of the Prime Minister’s entourage left for Kolkata on the previous day while the Prime Minster arrived in Kolkata on May 25 morning. The members of the entourage left the hotel on Friday early morning in a long motorcade comprising of about twenty cars for Santiniketan at Bolpur of Birbhum district. Santiniketan is about 163 km by road from Kolkata and the travel time is about three and half an hour to four hours. The Bangladesh Prime Minster and the Indian Prime Minister were to travel by army helicopters. The weather was hot with the temperature hovering around 35 degrees Celsius in Kolkata. When we reached Visva-Bharati campus it was about 11 in the day and as the midday was approaching so was the mercury rising. By the time two Prime Ministers accompanied by the Governor of West Bengal Keshari Nath Tripathi and the West Bengal Chief Minister Mamata Banerjee arrived at the university campus it was about midday and the temperature hit 43 degrees Celsius and without adequate arrangement and proper logistic support it seemed 50 in the convocation venue of the university. Before the inauguration of the Bangladesh Bhavan the dignitaries attended the annual convocation of the university. The university is a central university and the Indian Prime Minister or his nominee is the Chancellor of the university. The Chancellor or his nominee presides over the convocation and awards degrees to the graduates. Bangladesh’s Prime minister and other dignitaries were present on the dais while Narendra Modi delivered his speech in the unbearable scorching heat. Before Modi concluded his speech the Bangladesh delegates were taken to the Bangladesh Bhavan premises, the spectacular new addition to Rabindranath Tagore’s Visva-Bharati.  The Bangladesh Bhavan will be in addition to the existing Cheena Bhavan (China Bhavan, declared as a heritage building by UNESCO) and Nippon Bhavan (Japan Bhavan). All these complexes were built to foster relations between India and the countries they are named after. Like the Bangladesh Bhavan all these centres have libraries, reading rooms, research collections and conference rooms. The difference between Bangladesh Bhavan and the two others are quite distinguishing as the Bangladesh Bhavan is the latest addition with all modern facilities. The outstanding characteristic of Bangladesh Bhavan is that except the building materials every other fitting are made in Bangladesh and shipped in from Bangladesh. These includes crockery used in the cafeteria to toilet fittings and book shelves in the library with rich collections of  more than thousand books and other publications  on Bangladesh’s history, culture and heritage. The auditorium is furnished with Bangladeshi furniture including the back stage projection screen. The building was designed by Bangladeshi architects Rabiul Hossain and Ehsan. Bangladeshi artist Rafiqun Nabi also designed the two inaugural brass plaques, one in Bangla and the other one in English.  The total expense for the Bhavan stands at Taka 25 crore and Taka 10 lakh was given initially to Visva-Bharati University for maintenance.  In addition Bangladesh will create an endowment fund of INR10 crore for scholarship to be used for Bangladeshi scholars for doing PhD and Masters at Visva-Bharati University. 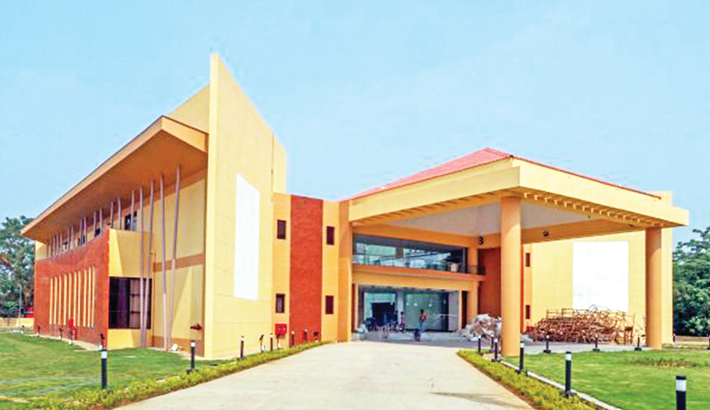 At the entrance of the Bhavan there are two frescos by Bangladeshi artist Rafiqun Nabi and Visva-Bharati artist Jogen Chowdhury (born in Bangladesh). The remarkable feature of the Bangladesh Bhavan besides its rich library is the display gallery where the history of Bangladesh from Pala Dynasty to the current day is displayed, both visual and in writing. And of course there is the display of the Bangladesh War of Liberation documents and pictures, the Swadin Bangla Betar Kendra photographs,  the role of intellectuals played in the sixties when Ayub Khan banned Rabindra Sangeet and Rabindranath’s literature in the then Pakistan, a gramophone record where Bangladeshi artist Kalim Sharafi and Sanjida Khatun’s Tagore songs were recorded. Portraits of Visva-Bharati alumni from their student days like Dr. Shahidullah, Dr. Mofazzel Haider Chowdhury have enriched the gallery at Bangladesh Bhavan.

A gallery displays replicas of wares used by Rabindranath during his days in Pathishar, Shilaidaho and Shahjadpur in Bangladesh. A lantern gifted to Tagore when he visited Iran and three gem stones from his personal collection were the only original items along with few archaeological artefacts from Bitharghar site in Bangladesh were on display on the day of the inauguration. Also on display are items made by Bangladeshi artisan in rural area including ‘Shitol Pati.’ Immediately after opening ceremony was over most of the originals including the possessions of Tagore were returned back to Bangladesh. Only few original items on long term loan from Bangladesh National Museum will be on display. Strangely, a section of social media pundits kept feeding fake news that Bangladesh has gifted away all its invaluable belongings of Tagore to India. However, the truth is what were in display are all replicas and the few originals that were taken for the opening ceremony have already been returned to Bangladesh.

After unveiling of the plaque by the two Prime Ministers in the presence of West Bengal Governor and the Chief Minister they along with the Bangladeshi delegation entered the elegant and impressive auditorium and took to the stage. Also present on the stage were the Foreign, Education and Cultural Affairs Ministers of Bangladesh and the Vice-Chancellor of Visva-Bharati Prof. Shabuj Koli Sen. A group of Bangladeshi and Indian students sang the national anthem of both countries. First to address the audience was the West Bengal Chief Minister Mamata Banerjee. She addressed Bangladesh Prime Minister as ‘My very dear Sk. Hasina’ and thanked her and the people of Bangladesh for constructing the Bangladesh Bhavan on the premises of Visva-Bharati University, the abode of knowledge and peace established by Kobi Guru Rabindranath Tagore. She reiterated that Rabindranath belongs to people of both sides of the border and hoped soon Bangladesh Bhavan will be a place where people will come in search of knowledge and do research on Rabindranath and Bangladesh. She also disclosed that she expects to establish a Bangabandhu Bhavan in Kolkata soon. When she said much water has flowed between the two countries and more will flow those present took it as a signal for solving the Teesta water sharing problem, though nothing was explicit. Mamata told that Bangladesh and India have been friends in the past and will remain friends in future.

On this day Bangladesh Prime Minister was at her best. Though she had a written speech she did not read out of it but in her extempore she narrated how Tagore influenced the Father of the Nation Bangabandhu Sk. Mujibur Rahman. She reminded that most of the literary works of Rabindranath was created in present day Bangladesh where he spent an important and creative part of his life. He belongs more to Bangladesh than to India she told the audience amidst cheers and applause from those present. As a reminiscence of the past she narrated her experience when she was awarded the highest honorary award ‘Deshikuttam’ in 1999 by Visva-Bharati and said she did not have the chance to study in this great seat of learning but being awarded the ‘Deshikuttam’ she feels she is part of the university. She thanked the people of India for sheltering one million refugees in 1971 and giving shelter to her and her sister Sk. Rehana in India by the then Prime Minister Indira Gandhi after 1975. She reminded the audience that when Rabindranath was banned in the then East Pakistan by the Pakistan Military Junta how the students and intellectuals protested. Sk Hasina also reminded that when Bangladesh became an independent nation in 1971 it was Bangabandhu who decided that Tagore’s ‘aamar sonar Bangla’ be the national anthem of Bangladesh. Sk. Hasina did not forget to remind the audience the sacrifices made by the students and people of Bangladesh in 1952 in the language movement. She made reference to the unprecedented gesture shown by all political parties in the Rajya Sabha and Lok Sabha when the Mujib-Indira accord was ratified in both houses of the Indian parliament and the long standing land boundary and enclave exchange problems were solved. Sk. Hasina expected that all unresolved issues between the two countries will be resolved through discussion between the leaders of both countries. Though she directly did not say anything on the Teesta issue, her diplomatic oblique remarks were indicative.

Modi is considered not only a politician but also a good orator who can carry the audience during his speech. He began in Bangla and thanked Sk. Hasina for establishing the Bangladesh Bhavan. He said Rabindranath preached universal humanism and influenced Bangabandhu greatly. Modi reminded though the War of Liberation was fought across the border, pain was equally felt by people on this side of the border. Modi reminded that there were many problems between the two countries which once were considered not solvable but today most of them have already been solved and he also expected that those remaining will also be solved. He praised the gesture shown by Bangladesh when Sk. Hasina in one of her visits to Delhi last year honoured 1,600 Indian soldiers who fought alongside the Mukti Bahini and reminded that such a gesture is unprecedented. Modi reminded that the cooperation and establishing connectivity between the two countries can solve many of the unresolved issues. Narendra Modi disclosed that Bangabandhu is equally respected in India as in Bangladesh and he is aware that Netaji Subhas Bose and Swami Vivekananda are equally respected on the other side of the border. Modi reminded how Gogon Horkora and Lalon Fakir from Bangladesh influenced Rabindranath. The Indian Prime Minister closed his remarks by reiterating that India will always be with Sk. Hasina in her   effort to achieve its goals of becoming a developed nation by 2041 and currently both the countries are passing through ‘Sonali Adya’ (Golden Chapter) of friendship and togetherness. Friendship between the two countries and the people will be on top of the priority list during the coming days.

The total programme lasted about 28 minutes. In these 28 minutes a new chapter was written in the annals of friendship between the two countries. Bangladesh Bhavan will remain a piece of Bangladesh at Visva-Bharati, the abode of peace created by the eternal poet Kobi Guru Rabindranath Tagore. Delegates from Bangladesh attending the event while socialising with the guests from Visva-Bharati University said, ‘We came from Bangladesh with love, and we are leaving a small piece of Bangladesh behind in Kobi Guru’s abode of peace, Santiniketan’.

The writer is an analyst and a commentator and travelled with Sk. Hasina to Visva-Bharati and Asansol as a

member of the official delegation