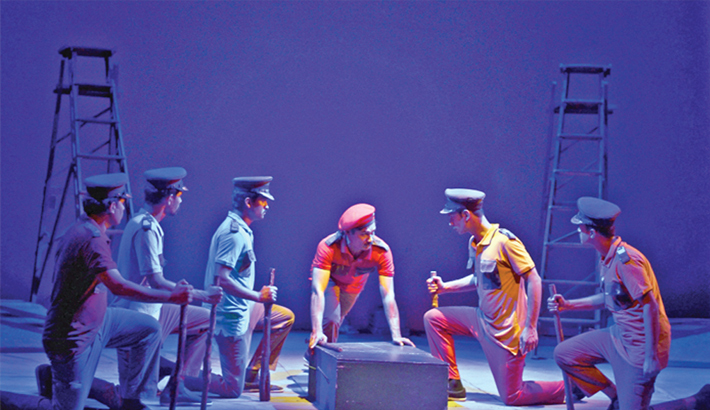 Crutcher Kornel has been adapted from Shahadu-zzaman’s novel of the same title by Soumya Sarkar and Samina Luthfa Nitra.

Directed by Mohammad Ali Haider, the play sheds light on the life of Colonel Abu Taher, one of the most decorated war heroes of the country.

He was responsible for an uprising which freed then army chief General Ziaur Rahman who later on hanged Taher on charges of high treason and killings. However, a Bangladeshi court declared the execution illegal in 2011.

Towards the end of August 1971 Taher, along with three other Bengali officers: Maj Abul Manzoor, Capt Dalim and Capt Ziauddin defected from the Pakistani Army and crossed over the border near Abbottabad, West Pakistan, into India. After two weeks under Indian intelligence screening and debriefing, he was sent to Bangladesh to lead Sector 11. Taher lost his leg from a mine blast during a debriefing on 2 November 1971.  For his valour in the Liberation War, he was awarded Bir Uttom after independence of Bangladesh.

Due to his left-leaning communist ideas of organizing the Bangladesh Army along the lines of the People's Liberation Army, he resigned from the army to form the Jatiyo Samajtantrik Dal.

Taher became the head of its armed wing the Gonobahini led a violent insurgency campaign against the government of Bangabandhu Sheikh Mujibur Rahman.

Historical figures like Matia Chowdhury, Siraj Shikder, Ziaur Rahman, and Khandoker Mustak are also presented in the play in a character-shifting style.

The character of Khandaker Mushtak provides somewhat of a comic relief in this otherwise serious play dealing with a critical time in the history of the country.

The play ends with the hanging of Colonel Taher in the ‘kangaroo court.’ The cast of the play included Imran Khan Munna, Kazi Roksana Ruma, Samina Luthfa Nitra, Toufique Hasan Bhuiyan, Pankaj Majumder, and Ivan Riaz, among others.