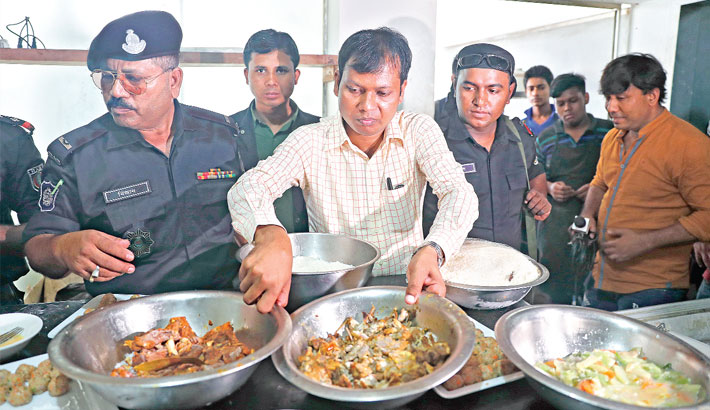 A mobile court of Rapid Action Battalion (RAB) conducts a drive at Handi Restaurant in Banani area of the capital on Tuesday. It fined the restaurant for selling stale food. — sun photo

Food adulteration is continuing unabated in the holy month of Ramadan even though government authorities have launched a special drive against the menace.

A section of businessmen is making a mint by selling substandard food, sources said.

During the ongoing drive, government authorities destroyed a huge quantity of chemically-ripened mangos and fined some super shops, prominent restaurants for adulterating foods.

Being aware of the danger of food poisoning, consumers urged a countrywide drive against food adulteration round the year.

They demanded the anti-adulteration drive be carried out across the country to ensure food safety.

Officials from Bangladesh Standards and Testing Institution (BSTI) and Dhaka district administration and police and RAB members began drives against food adulteration in the capital in Ramadan.

During the drives, they seized adulterated food items, jailed and fined businessmen and sealed off the businesses.

It was found that colouring agents are used in spices, sauces, juices, lentils and oils. Formalin and carbide used in fish, fruit, meat and milk.

Besides, burnt engine oil is used to fry ‘jilapi’ while artificial fragrance is applied on flowers.

It was seen that mobile courts fined top restaurants on roadside makeshift shops for selling unhygienic and adulterated food items.

Jabed Ali, a consumer, said, “In Ramadan, a special drive were conducted to check food adulteration. But such a drive was not seen in other time of the year.”

“People have full support for drives against food adulteration. So we demanded that the anti-adulteration drive should continue round the year,” he added.

Shaiduzaman, a banker, said, “We eat food for living. But if the food is adulterated, what we can do? Those who are mixing contaminated items in food are the enemy of the country.”

“I urged the government to continue a mobile-court drive against food adulteration not only in Ramadan month but also in whole year,” he added.

On Tuesday, A RAB-led mobile court fined Handi Restaurant in Banani for unhygienic condition in the kitchen.

On May 28, a mobile court fined ‘Khushbu Biriyani and Restaurant’ in the city’s Gulshan for using textile dyes for colouring Biriyani and also shut down the kitchen of the eatery.

On May 20, Supershop Swapno’s Banani outlet was fined Tk 10 lakh for selling date-expired food products and more than normal pricing.

On May 23, a mobile court fined KFC, American Burger, Dawat-e Mejban, United Catering, and Dynamic Food Court for rotten and unhealthy foods at Dhanmondi area in the capital.

A mobile court of police fined superstore Meenabazar’s Shantinagar outlet Tk 200,000 for selling beef at a higher price than that fixed by Dhaka South City Corporation and soda water without the BSTI approval.

The superstore was also selling soda water with a BSTI approval logo though the product was not approved by the institution, the magistrate added.

On May 28, a mobile court of the Dhaka Metropolitan Police fined Boomers Cafe Tk 1 lakh for keeping food in unhygienic environment in Baily Road area.

He also said these unhygienic food items are very harmful to consumers and most of them are not aware of it. Even in many cases, autistic children can be born as a consequence of taking poisonous ingredients.

“I think this is a good initiative against the dishonest businessmen. But I demanded the acceleration of drives against unscrupulous traders and vendors who sell adulterated food items to make windfall profit round the year,” he added.

Professor Dr Khaleda Islam of Institute of Nutrition and Food Science of Dhaka University said if a person eats adulterated food, it gets rapidly digested and transported into blood, causing serious health hazards.

In Ramadan, a demand for fruit is very high. Cashing in on the time, some dishonest traders use formalin in dates, carbide in mango and other chemicals in fruits.

“These chemicals, especially formalin, are very harmful to human health. Formalin is poisonous and can cause cancer,” she added.

She further said, “Most common iftar items selling in the capital are adulterated and laced with harmful chemicals.”

“Owners of different iftar shops reportedly mix inedible colours with their items like beguni, potato and vegetable chops, piaju and jilapi to make these attractive to allure buyers.”

They also used burnt cooking oil, even mix mobil (lubricants) proportionately with the burnt oil to make crispy, she added.

She urged the people to be aware and make others conscious about the harmful effects of taking adulterated foods.

The professor emphasised the need for creating mass awareness about health hazards being posed by chemically-treated fruits.