‘Build bridges among the Muslim’ 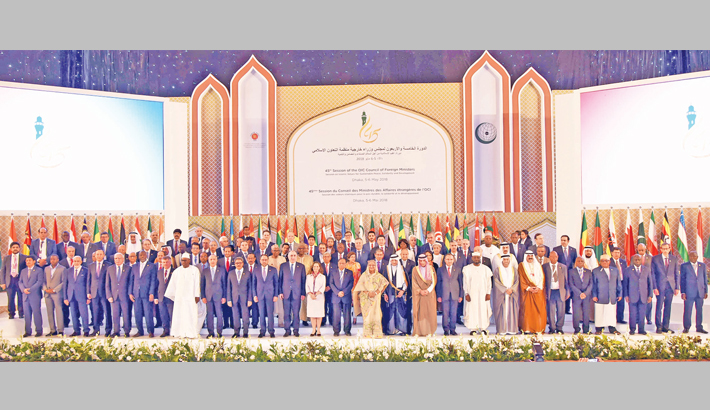 Participants of the 45th session of the Council of Foreign Ministers (CFM) of OIC pose for a photo with Prime Minister Sheikh Hasina at the inaugural ceremony of the council at Bangabandhu International Conference Centre (BICC) in the capital on Saturday. - PID photo

Foreign Minister AH Mahmood Ali has proposed the OIC countries to build bridges among the Muslim populations of non-OIC countries to spread the benefits of the Islamic organisation.

“There is a need to build bridges among the Muslim populations of non-OIC countries so that a large number of Muslims are benefited by the good deeds of OIC”, he said.

Prime Minister Sheikh Hasina inaugurated the two-day conference at BICC in the capital on Saturday.

The foreign minister said that OIC needed reforms and re-structuring so that the large number of Muslim citizens of non-OIC countries can be brought within the fold of the Islamic organisation.

“Muslims may be minorities in those countries, but in terms of number, they often exceed the total population of many OIC member countries”, he said.

Ali also urged the leaders of the OIC nations to reinforce their efforts to convince Myanmar to take back the Rohingya people to their homeland from Bangladesh.

Calling for solidarity among the member countries, he said “At OIC, we should take strong actions manifesting solidarity with them and strengthen efforts in persuading the government of Myanmar to take urgent measures for sustainable repatriation of Rohingya people to their homeland in the Rakhine State of Myanmar”.

He said hundreds of thousands of desperate Rohingya people are fleeing a vicious purge in Myanmar while more than 1.1 million people were forcibly displaced from Myanmar.

About the theme of this year’s OIC-CFM, he said the theme is based on the three pillars— peace, solidarity and development, which are interlinked.

It may mentioned that the Bangladesh foreign minister was elected the chairman of the OIC-CFM for the next one year.

Over 550 representatives of the OIC and different international organisations, including around 40 ministers and state ministers, are attending the event which will conclude on Sunday.