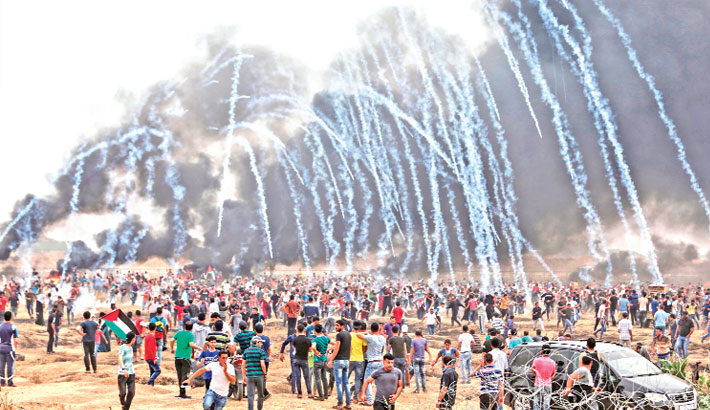 Palestinian protesters flee from incoming teargas canisters during clashes with Israeli forces along the border with the Gaza strip east of Gaza City on Friday, on the sixth straight Friday of mass demonstrations calling for the right to return to their historic homelands. —AFP PHOTO

GAZA CITY: Dozens of Palestinians were wounded by Israeli gunfire on Friday as thousands returned to the Gaza border for a sixth week of protests that have seen nearly 50 demonstrators killed.

Medics treated 1,143 people, most for tear gas inhalation but 83 for wounds caused by live fire, the Gaza health ministry said.

Black smoke billowed over a protest camp east of Gaza City where Palestinians burned tyres and flew kites, at least one carrying a Molotov cocktail intended to set fire to nearby Israeli fields.

After advancing toward the border fence, protesters would retreat as the Israeli army fired tear gas.

A military spokeswoman said that some of the protesters threw stones at the Israeli forces.

The army also said there was an attempt to “sabotage the security fence and to infiltrate into Israel”.

It said the attempt was “thwarted” when soldiers arrived at the scene and the Palestinians involved returned to the Gaza Strip.

Forty-nine Palestinians have been killed by Israeli forces since protests and clashes began along the Gaza border on March 30, and hundreds of others have been wounded by gunfire.

Crowds were smaller on Friday afternoon than in previous weeks, with Palestinians saying they expect a major protest on May 14, when the United States will move its embassy in Israel from Tel Aviv to Jerusalem.

Israel says its soldiers only open fire when necessary to stop infiltrations, damage to the fence and attacks. No Israelis have been hurt in the weeks of protests and the military has faced international criticism for its use of live ammunition.

Shifa Abu Qadous, 28, whose family is originally from Jaffa, part of Tel Aviv, was bringing water to protesters near the border fence.

Wearing a headscarf and a dust-mask hanging around her neck, she said she came to the protests every week. “I’m not afraid, there’s only one death,” she said. “Today or tomorrow or after that we will return to our homes.”

Youths met behind a series of bunkers reinforced with sandbags in the area leading up to the border with Israel, while older demonstrators remained further back at protest tents.

Early in the day, a group of Palestinian youths threw stones in the direction of Israeli soldiers, who had taken up position some 50 metres (yards) away on the other side of the fence. A Guy Fawkes mask strapped to his belt and a Palestinian flag around his neck, Abdullah Issa, 22, said they hoped to send dozens of kites with Molotov cocktails over the fence.

“We will put Molotov cocktails on the Israeli farms,” Issa said.

“They have no solution for the kites.” Israeli media have in recent days reported significant damage to farms due to kite-flown Molotov cocktails, though the devices face difficult odds in making it across the fence while still lit.

The Israeli army estimated that 10,000 Palestinians took part in this Friday’s demonstrations in five main locations along the border fence.

Hundreds of Palestinians vandalised the Gaza side of the Kerem Shalom goods crossing and torched the pipes that carry fuel and gas from Israel, the army said.

“This is a cynical act of terror that harms the wellbeing of the Gaza residents and the humanitarian efforts made by Israel and many other countries,” the army said.

In addition, two army drones crashed in the Gaza Strip during the day’s events.

“The matter is being looked into,” a statement from the army said.

Israel accuses Hamas, the Islamist movement that runs Gaza and with whom it has fought three wars since 2008, of seeking to use the weekly protests as a cover to carry out violence.

The Israeli military has come in for criticism from abroad over its use of live fire, with UN chief Antonio Guterres and the European Union calling for an independent investigation, rejected by Israel.

Demonstrators are demanding the right to return to their homes seized by Israel in 1948, which Israel argues would effectively spell the end of their country.

The protests are due to continue until mid-May, when the US plans to move its embassy.

The move has deeply angered the Palestinians, who see the Israeli-annexed eastern sector of the city as the capital of their future state.            —AFP