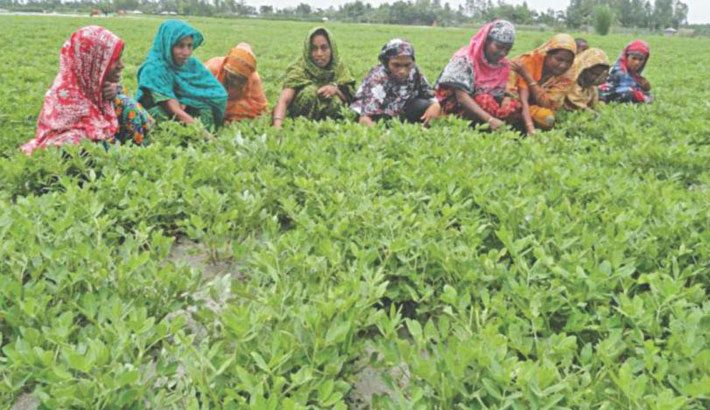 RANGPUR: The riverside and char people are happy now after getting bumper production of various crops cultivated on the dried-up riverbeds and char lands in Rangpur agriculture region this season, reports BSS.

Officials of the Department of Agriculture Extension (DAE) said the riverside small and marginal farmers and char people just completed harvest of their various crops safely before commencement of the rainy season.

The char and riverside people, small and marginal farmers cultivated crops on over 86,000 hectares of such lands in all five districts of Rangpur, Gaibandha Lalmonirhat, Kurigram and Nilphamari under Rangpur agriculture region this season.

Talking to BSS, Horticulture specialist of the DAE at its regional office Khondker Md Mesbahul Islam said crop cultivation on these lands became possible due to drying-up and silting-up of the rivers and lowering of the underground water level.

“The farmers already completed harvest of the crops before beginning of the upcoming rainy season though jute crop on fewer low-lying char areas are growing under the threat of early floods,” he said.

River-eroded and char people Abdur Razzaque, Anwar Hossain, Kobiza Khatun and Nasima of village Paschim Mohipur under Gangachara upazila in Rangpur said they got bumper production of different crops cultivated on the Teesta riverbed this season. Riverside small and marginal farmers Sohel Rana and Abdul Aziz of village Char Dakshin Kharibari in Nilphamari, Khalil and Mohidul of village Char Khuniagachh in Lalmonirhat also completed harvest and got bumper output of various crops. Char people Nur Alam of village Machabandha, Abdus Sobhan of village Char Montola and Sohrab Ali of Char Korai Barisal under Chilmari upazila in Kurigram said they got bumper output of their crops cultivated on the Brahmaputra riverbed this year.

Deputy Director of the DAE at its regional office Md Moniruzzaman said the farmers are cultivating various crops on the dried up riverbeds and char areas in recent years due to continuous deposition of alluvial soil over the past four decades.