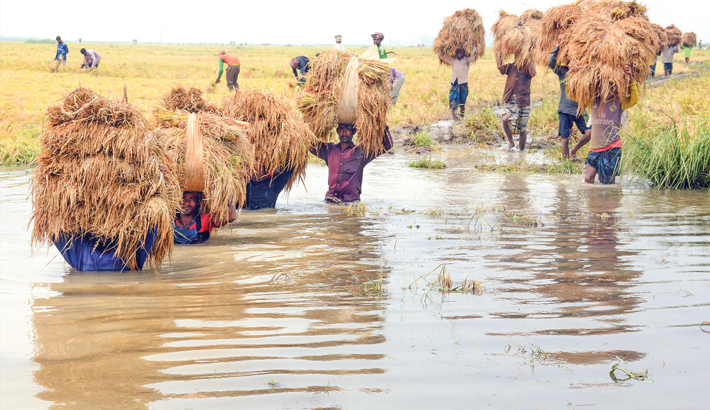 Farmers carry home Boro paddy through chest-deep water in Chalan Beel area of Singra upazila in Natore. As heavy rains and nor’westers damaged their crops, they were compelled to hire workers at wages double the normal-time rates to cut the paddy. The picture was taken on Saturday. — monirul islam maruf

The maximum production from other hybrid varieties ranges from 8 to 8.5 tonnes per hectares.

“Anyone can produce seeds from the paddy as the Hybrid-5 has been developed from local paternal lines. Farmers can collect seeds of this hybrid variety from us at low cost and BRRI scientists will provide technical support to them,” he said.

Agri-scientists said Hybrid-5 is thinner than other high-yielding varieties developed earlier. The new variety is rich in food value as it contains 23.4 percent carbohydrates.

According to them, Hybrid-5 is more resilient to diseases, natural calamities and adverse weather conditions than other varieties and it is suitable for cultivation during the Boro season.

Farmers will be able to grow the new variety in 140-145 days, and its neck is hard enough to survive storms.

Farmers will be able to grow the new variety in 140-145 days, and its neck is hard enough to survive storms. Each paddy plant of this variety contains 12-15 bunches, which helps deliver higher yields, BRRI scientists informed.

He also said most of the hybrid rice varieties are imported and some of those were developed from foreign paternal lines.

Farmers won’t need to buy imported seed at higher price each year, they can now easily produce seeds from this hybrid variety, he said.

This hybrid variety’s rice is crispier than other similar rice varieties——a quality more desirable by the consumers, said the scientist.

He also said widespread cultivation of this new variety will help reduce import dependency on rice seeds as well as lowering the production cost.

The country has to spend Tk 200 crore a year for importing seeds and parent line seeds. The import cost could be reduced by up to 75 percent if BRRI Hybrid-5 is cultivated widely.

BRRI developed several hybrid rice varieties. Of those – BRRI Hybrid-1, 2, 3 and 5 are cultivated in boro season while BRRI hybrid 4 and 6 are suitable for the aman season.