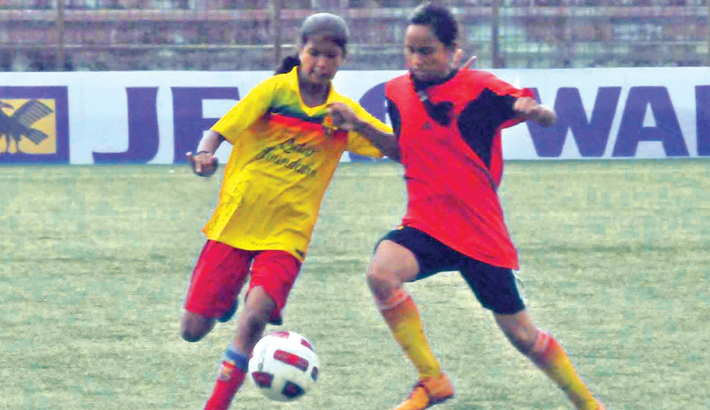 Players of Thakurgaon and Magura Under-14 Women’s Football teams vie for the ball during their match on Saturday. — BFF Photo

Thakurgaon District and Tangail District under-14 women’s football teams completely schooled their opponent in their JFA Under-14 Women’s Football Championship 2018 final round matches on Saturday.

In the first match of the day, Thakurgaon District bulldozed over Magura District by 3-0 goals at Bir Sherestha Shaheed Sepoy Mostafa Kamal Stadium in the capital.

Thakurgaon eves darted through the centerline took the game to Magura defence. Both the teams tussled hard as neither was able to score a goal in the first-half of the match.

On the 48th minute of the match, Kakuli, the heart of the Thakurgaon attack, zipped through Magura lines and scored the first goal of the match.

In the day’s other match, Tangail District took apart Rajshahi District by 4-0 goals at the same venue.

Tangail took the early lead as Mahfuza placed a picture perfect goal on the 22nd minute of the match.

It was now Rehana’s turn to taste triumph as she netted a beautiful one on the 35th minute of the encounter. Tangail were now comfortably position with 2-0 goals in their favour.

Shaheda advanced the lead for Tangail with her lone goal on the 37th minute. While Rehana scored her second goal of the match on 70th minute.