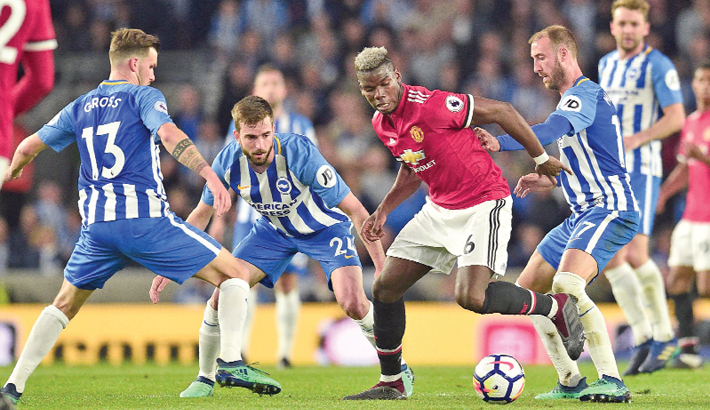 Brighton secured their place in the Premier League next season as Pascal Gross’s solitary goal inflicted a 1-0 defeat on Manchester United on Friday.

Just over two weeks ahead of the FA Cup final against his old club Chelsea, United manager Jose Mourinho made six changes and was punished as Brighton recorded their first win over the Red Devils since 1982.

Chants of “we are staying up” rang around a packed house at the Amex Stadium at full-time as victory moved Brighton up to 11th and more importantly eight points clear of the bottom three.

The theme tune to the World War II movie ‘The Great Escape’ also rang around the stadium as the players celebrated after an epic effort.

By contrast, defeat means United must wait to secure second place as they remain five points clear of Liverpool with Tottenham a point further adrift.

United were without either of the injured Romelu Lukaku or Alexis Sanchez, and their firepower was missed as Anthony Martial and Marcus Rashford failed to make the most of rare chances to start up front.

The visitors did have the ball in the net after just four minutes when Marouanne Fellaini turned Rashford’s free-kick in from close range, but the Belgian was rightly flagged for offside.

Brighton’s survival party had been put on hold by a run of seven games without a win.

Goals have been hard to come by for Chris Hughton’s men in their first season back in the top flight for 34 years. But they got the helping hand they needed from the goal line technology system to seal another campaign in the Premier League on 57 minutes.

The dangerous Jose Izquierdo got to the by-line and when his cross was parried by De Gea, the ball crossed the line from Gross’s header by the finest of margins before being hooked clear by Marcus Rojo.

Brighton’s tails were up and they could even have added to their lead when Izquierdo fired inches wide moments later.