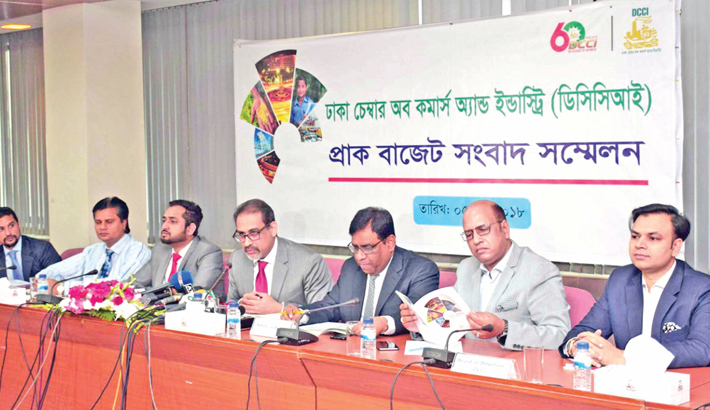 Dhaka Chamber of Commerce and Industry (DCCI) President Abul Kasem Khan speaks at a pre-budget press conference in DCCI conference room in the capital on Saturday.

The Dhaka Chamber of Commerce and Industry (DCCI) on Tuesday urged the government to cut the existing corporate tax rates and increase the income tax thresholds in the ensuing budget for fiscal year (2018-2019).

The chamber made a set of proposals at a pre-budget meet the press at the DCCI auditorium in the capital on Saturday.

Abul Kasem Khan said the government should gradually decrease the corporate tax rates for different companies in phase-wise in next three budgets by 5 percent, 7 percent and 10 percent, respectively.

DCCI president said that ‘such type of reduction in corporate tax will give confidence to the companies to expand their businesses with fresh investment while it will also encourage them to pay tax properly.’  ‘Government can given condition with reduction in corporate tax for expansion of their businesses with fresh investment and creation of employment opportunity’, he added.

About tax-free income limit, the DCCI president recommended NBR to raise the threshold to Tk 300,000 for individual taxpayers from the existing Tk 250,000 considering the increased cost of living.

The chamber also made a call to reduce the highest income tax rate to 25 per cent from the current 30 per cent.

Besides, Abul Kasem Khan proposed for raising the ceiling of surcharge-free net wealth to Tk 5 crore from the existing Tk 2.25 crore in the budget for FY 2018-19.

He said the government should continue the package VAT to ensure transparency and accountability in VAT collection.

Among other proposals, the DCCI recommended the government for imposing 10 percent tax on dividend income instead of current 20 percent.