The International Cricket Council confirmed the schedule of the ICC Cricket World Cup 2019 on Thursday, which will be staged in England and Wales from May 30 to July 14, reports Icc-cricket.com.

Bangladesh will start their mission on June 2 against South Africa at the Oval in London.

England will open the tournament at The Oval on May 30 when they will take on South Africa, while Australia will launch their title defence on June 1 against the ICC Cricket World Cup Qualifier champions Afghanistan in a day/night match in Bristol. 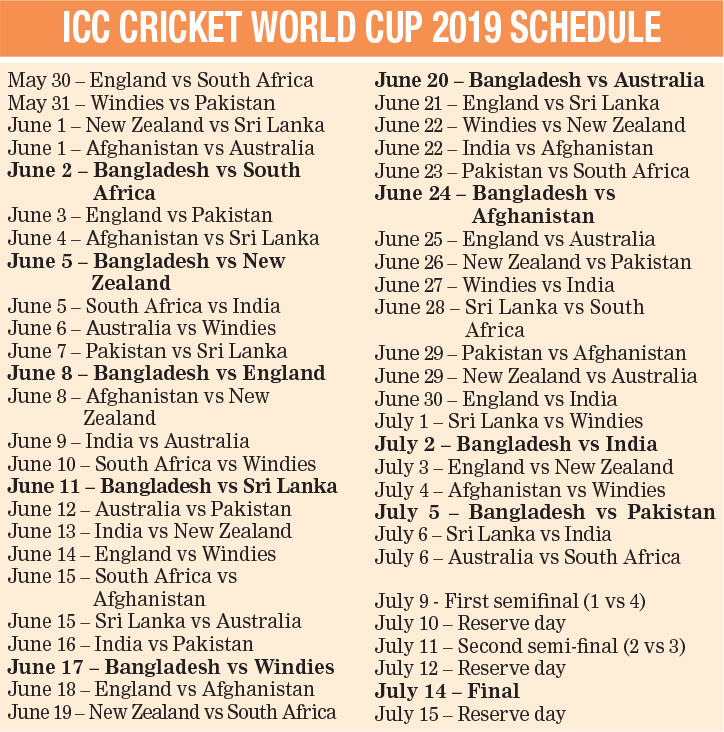 Old Trafford in Manchester and Edgbaston in Birmingham will stage the two semi-finals on July 9 and 11, while Lord’s will play host to a World Cup final for the fifth time, on 14 July. All these three matches will have reserve days.

Eleven world-class venues will be used in the 46-day tournament in which each side will play the other once in a single-league format with the top four sides after 45 matches progressing to the semi-finals.

Old Trafford in Manchester will host maximum six matches, while Edgbaston in Birmingham, Hampshire Bowl in Southampton, Lord’s and The Oval (both in London), and Trent Bridge in Nottingham will stage five matches each. Cardiff Wales Stadium in Cardiff and Headingley in Leeds have been allocated four matches each and County Ground Bristol in Bristol, County Ground Taunton in Taunton and The Riverside in Chester-le-Street have got three matches each.