OIC FMs Meet in May

Bangladesh to rebrand itself 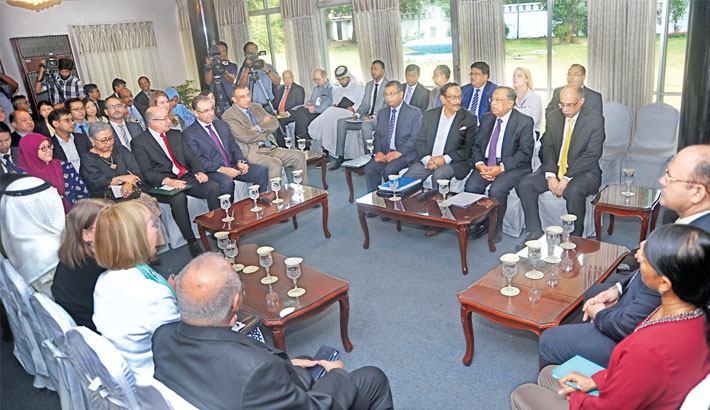 The 45th session of the Organisation of Islamic Cooperation (OIC) Council of Foreign Ministers (CFM) will begin in the capital city on May 5, according to the foreign ministry.

The government is gearing up for holding the two-day meeting at Bangabandhu International Conference Centre (BICC), but the venue for the meeting could change in the final moment, said a foreign ministry official.

Prime Minister Sheikh Hasina is scheduled to inaugurate the conference which will be attended by foreign ministers of the 57 member states.

President Md Abdul Hamid is likely to address the closing ceremony of the meeting on “Islamic Values for Sustainable Peace, Solidarity and Development”.

Talking to daily sun, a high-ranking official said Bangladesh would like to exploit the meeting. This is an opportunity to share Bangladesh’s development stories with the member countries besides focusing on challenges the Muslim world are going through these days, he said.

“We would like to use the meeting as an opportunity to show the fellow Muslim nations a new emerging Bangladesh,” he added. State Minister for Foreign Affairs has recently told media that holding the meeting is the evidence of success of the measured diplomacy of the incumbent government.

The state minister also mentioned that with the arrangement of the vital meeting of the Muslim nations, Bangladesh has established it as an influential member of the organisation of the Islamic countries.

This is an opportunity for Bangladesh to enhance its good image and strengthen its position in the leadership role of the Islamic body, said a diplomatic source.

As part of the preparation, Bangladesh recently held an inter-ministerial meeting at the Ministry of Foreign Affairs to discuss the upcoming event.

Dhaka also wants to use the forum as an opportunity to persuade Muslim countries to take more active and effective steps to find solutions to the Rohingya crisis.

Former secretary of the foreign ministry AKM Atiqur Rahman told daily sun that the Rohingya issue must dominate the agenda of the meeting.

“Though I am skeptical about the capacity and ability of the OIC to find solutions to the crisis,” he added.

The former career diplomat called upon the government to highlight the success stories of Bangladesh during the meeting so that the Muslim nations could know the country anew. “We have a lot of success stories including being capable of graduating to a developing country,” he observed.

Over the last decade, Bangladesh witnessed huge developments and the world especially the Muslim world should know about them, he noted.

Bangladesh has also another issue during the meeting as the country has nominated Kamrul Ahsan, Secretary (Consular) at the Foreign Ministry, as a candidate of Assistant Secretary-General (Science and Technology) of the OIC.