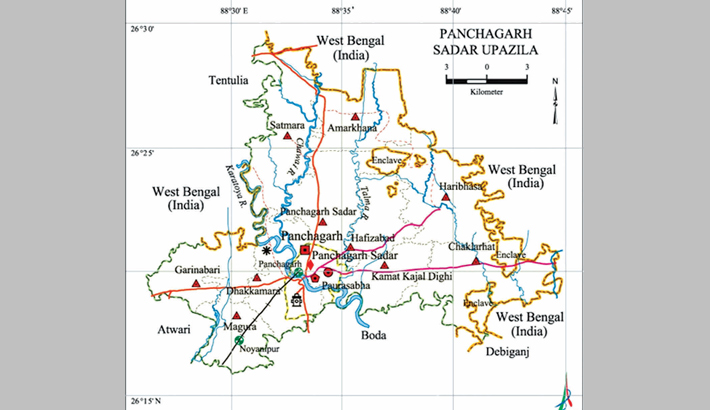 PANCHAGARH SADAR UPAZILA: (Panchagarh District) area 347.08 sq km, located in between 26°17' and 26°29' North latitudes and in between 88°31' and 88°46' East longitudes. It is bounded by West Bengal state of India on the North and East, Boda and Debiganj upazilas on the South, Atwari and Tentulia upazilas and West Bengal state of India on the West. The upazila has two enclaves; the Indian enclaves in the upazila are Garati and Singimari.

Historical events a large number of the Muslim population migrated and settled at Panchagarh town and nearby villages in consequent of the Hindu Muslim riot in Jalpaiguri town during 1949 to 1950. The people of this upazila took part in various movements such as fakir-Sannyasi resistance (1762 to 1800), Tebhaga movement (1938 to 1939 and 1946 to 1947), Language movement, movement for turning Panchagarh into a sub-division (1949 to 1980), movement against the oppression of the EPR on the border area, mass upsurge in 1969, etc. At the beginning of the war of liberation two members of the EPR were shot dead by the Pak army; besides, 18 Pak soldiers were killed in an encounter with the freedom fighters. The freedom fighters also destroyed the bridge near the Amarkhana camp on the Chawai River to obstruct the Pak army to the North. During the period between 19 April and 30 April 1971 the Pak army killed about fifty persons on upazila town and at Mirgarh. In July the Pak army killed 16 persons at Amarkhana.

Marks of the War of Liberation Mass grave 1 (at a place on the bank of the Karatoya); Shaheed Farooque Ahmad Memorial Monument at Dhakka-Mara of Panchagarh town; grave of Martyr Freedom Fighter Sakimuddin in front of the Baital Aman Mosque of Jagdal Hat.

Natural resources Nuri stone and sand have been found in this upazila.