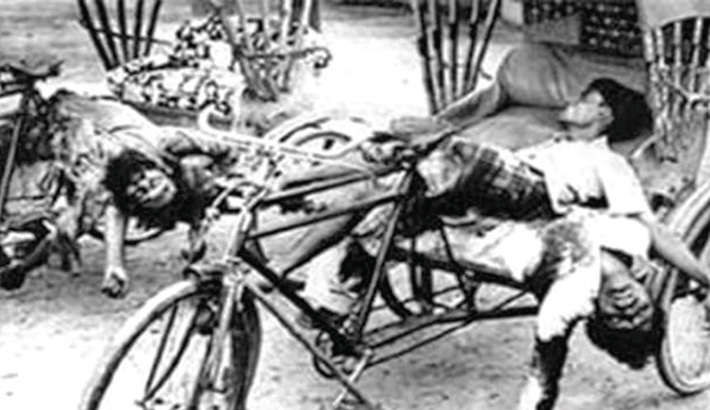 The nation will observe the Genocide Day today, commemorating the barbaric mass killing by Pakistani occupation forces on March 25 in 1971.

The day is going to be observed officially for the second time in the country as parliament on March 11 last year unanimously adopted a resolution to observe March 25 as the Mass Killing Day (Gonohotya Dibos).

On the black night of March 25 in 1971, the Pakistani military junta resorted to the mass killing in Dhaka to implement their blueprint to thwart the Awami League’s assumption of office following the election mandate of 1970.

In the attack dubbed ‘Operation Searchlight’, the Pakistani forces mercilessly killed the Bangalee members of the East Pakistan Rifles and police, students, teachers and common people.

They killed people indiscriminately, set fire to houses and property and looted business establishments, leaving a trail of destruction.

In his message, the President termed the black night ‘a brutal genocide in the twentieth century’, and said they (Pakistani occupation forces) just wanted to stop the movement of Bangalee police, EPR, students and people in the name of ‘Operation Searchlight’.

Abdul Hamid also urged all irrespective of caste and creed to establish a non-communal and democratic country imbued with the spirit of the Liberation War.

Prime Minister Sheikh Hasina, in her message, said the Pakistani occupation forces swooped on unarmed Bangalees on March 25 night and they along with their local collaborators, including Rajakar, Al Badr and Al Shams, carried out atrocities.

The incidents of killing of a large number of people in the short span of time are rare in the world, she said.

To mark the day, the government has drawn up various programmes.

The country is set to stage a one-minute blackout from 9:00pm to 9:01pm on March 25 recalling the horror of the March 25, 1971 black night when the Pakistanis launched genocide on Bangladesh soil.

Besides, the Liberation War Affairs Ministry will hold a discussion along with display of photographs on ‘Gonohotya Dibos’ (Day of Genocide) at 10:00am at Suhrawardy Udyan.

Different political and socio-cultural organisations have also chalked out elaborate programmes to mark the day.

On the day, the ruling Awami League will hold a discussion at 4:00pm at Bangabandhu International Conference (BICC) in the capital. Prime Minister Sheikh Hasina is expected to chair the programme.

Dhaka University authorities and Dhaka University Teachers’ Association (DUTA) have decided to observe the Genocide Day. Different programmes have been chalked out to mark the day.

As part of the programmes, a photography exhibition will be held near the Independence Monument at the historic Suhrawardy Udyan reminding the atrocities committed on March 25, 1971.

The programmes of lighting candle at 7:00pm, screening of a documentary and a discussion would be held, while a special munajat and milad mahfil will be held after Asr prayers.

In a press release, AL general secretary Obaidul Quader requested the leaders and activists to observe the day in a befitting manner.

Apart from the ruling party, various organisations will hold cultural and discussion programmes on the Liberation War in every district.