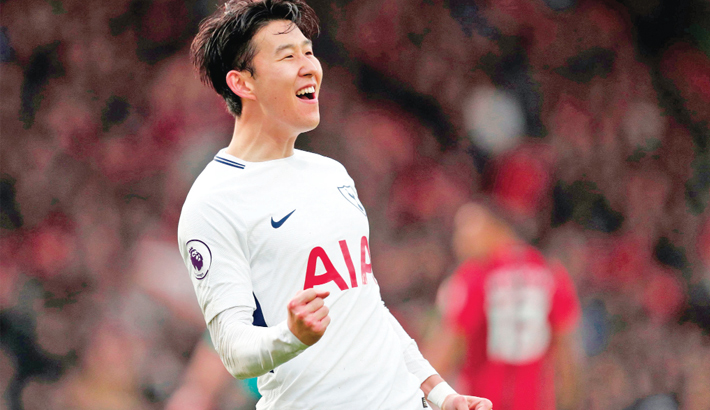 Tottenham Hotspur striker Son Heung-Min celebrates after scoring a goal against Bournemouth during their English Premier League match at Vitality Stadium in Bournemouth in England on Sunday. Tottenham won 4-1.

Son Heung-Min ensured Tottenham Hotspur didn’t pay a heavy price for an ankle injury suffered by Harry Kane as he scored twice in a win 4-1 at Bournemouth on Sunday.

Sixth-placed Arsenal were also comfortable 3-0 winners over Watford at the Emirates Stadium to snap a run of three straight Premier League defeats.

Spurs move above Liverpool into third in the Premier League, but it was a bittersweet victory with concerns over Kane’s fitness for both club and country.

Kane did have the ball in the net when he collided with Asmir Begovic just before the half-hour mark, but the offside flag had already been raised.

And much worse was to come for the visitors when Kane failed to return as he limped away to protect the same right ankle that saw him spend two short spells on the sidelines last season.

The visitors always looked the likelier side to score after half-time and Son continued his scintillating form by acrobatically turning home Alli’s cross.

And with Bournemouth pushing for an equaliser, the South Korean had acres of space to run through and slot home his 18th goal of the season three minutes from time.

But the Bournemouth ‘keeper was at fault as he parried Kieran Trippier’s cross into Aurier’s path, and the Ivorian headed home Spurs’ fourth in stoppage time.

Earlier, Arsenal eased the mounting pressure on Arsene Wenger by easing past Watford for a first Premier League win for five weeks.

Former Borussia Dortmund duo Pierre-Emerick Aubameyang and Henrikh Mkhitaryan again showed their fine relationship for the Gunners by teeing each other up to score in the second half after Shkodran Mustafi had headed the hosts into the lead.

Watford could have got back into the game at 2-0, but Troy Deeney saw his penalty saved by Petr Cech.

That was a sweet moment for the home fans, as Deeney had questioned Arsenal’s heart when the Hornets won the corresponding fixture in October.

It was the first spot-kick the Czech ‘keeper had saved in three years with Arsenal and it ensured he also became the first man to register 200 clean sheets in the Premier League.