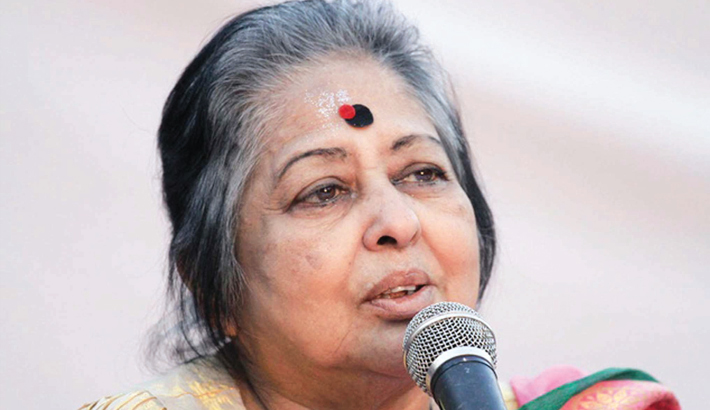 A civic memorial meeting on noted sculptor and freedom fighter Ferdousi Priyabhashini will be held at the Central Shaheed Minar at 4.30 pm on Tuesday.

The freedom fighter passed away at a city hospital on March 6 (Tuesday) noon at 71 struggling with diseases, reports UNB.

Sammilita Sangskritik Jote will organise the memorial meeting while poet, writers, artists and different professionals will discuss her life and works.

President of Sammilita Sangskritik Jote Golam Kuddus will preside over the programme with its general secretary Hasan Arif delivering the welcome speech.

Ferdousi Priyabhashini, who has been suffering from multiple complications including kidney ailment, diabetes, high blood pressure, orthopaedics and heart disease, and undergoing treatment at Labaid Hospital, breathed her last around 12:45 pm on March 6.

She left behind her three sons, two daughters and a host of relatives and admirers to mourn the death.

In November last year, Priyabhashini fell over on the floor in her Gulshan residence and got hurt at her heel. A bone of the heel was replaced after that incident.

Her body was taken to Central Shaheed Minar on March 8 where people from all walks of life paid their last tribute. Her namaz-e-janaza was held at Dhaka University's central mosque. She was buried at Mirpur Martyred Intellectuals Graveyard on that day beside the Jahanara Imam.

The government awarded her Independence Day Award in 2010. Her biography book 'Nindito Nandan' was published in Ekushey Book Fair in 2014.

Ferdousi Priyabhashini, who was persecuted by Pakistani occupation army and its local collaborators during the Liberation War, got the 'freedom fighter' recognition in 2016.