The New plant to increase total water supply by 390 mld 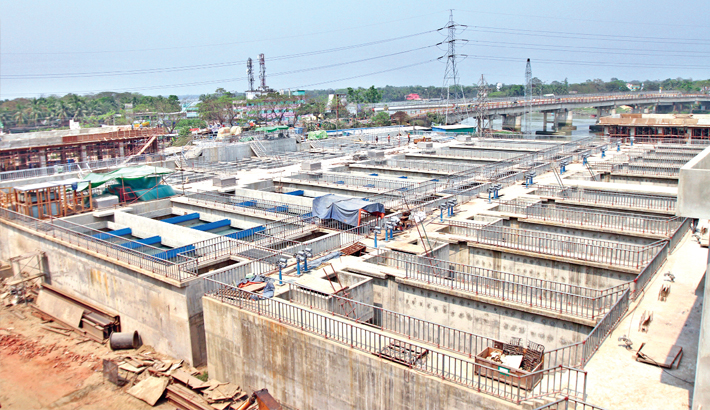 A view of the ‘90 MLD Madunaghat Water Treatment Plant’ under construction at Hathazari upazila in the district. The photo was taken on Tuesday. — Rabin Chowdhury

With this, the total supply of water will increase to 390 MLD to meet demand of 84 percent people of the port city.

Sources in the Chittagong Water Supply and Sewerage Authority (CWASA) said that some 80 percent works of the ’90-MLD Treatment Plant’ and a ‘Booster Pump Station’ have already been completed while rest other works will be completed by June this year.

CWASA has been carrying out works of the treatment plant and pump station under a component of Chittagong Water Supply Improvement and Sanitation Project (CWSISP) to cope with increasing demand of the essential amenity of daily life.

The progress report of the treatment plant and pump station was placed before a board meeting of the CWASA recently.

The concerned authorities hoped that after completion of the development works, they will be able to put the treatment plant and booster pump into operation by June this year.

Sources said a Development Project Proforma (DPP) was sent to the concerned division of Local Government, Rural Development and Cooperatives Ministry on January 1 in 2011.

“Korean Taeyoung Engineering and Construction Company” Limited was assigned as contractor to develop the water treatment and booster pump station on December 28 in 2014.

Later, a Revised Development Project Proforma (DPP) involving Tk 1890.82 crore was approved at a meeting of the ECNEC on February 9 last year.

Of the amount, Government of Bangladesh (GoB) is providing Tk 373.37 crore, foreign donors Tk 1494.90 crore and the CWASA TK 22.54 crore. Sources said the CWASA is now supplying 300 MLD water to the city dwellers against the total demand of around 409 MLD.

The residents now get water supply for around 14 to 15 hours a day while the supply will continue for around 18 hours a day after the water treatment goes into operation, they said.

Moreover, after successful implementation of four ongoing mega projects, total production of CWASA will stand at 640 MLD to help ensure 24-hour supply of water in the city by 2021 and meet demand for water in the city and adjoining areas till 2040.

When contacted, Superintendent Engineer (Planning and Construction) Mohammed Ariful Islam of the CWASA told the daily sun that water crisis of the city will reduce to a great extent after the treatment plant goes into generation.

He said the treatment plant will add additional 90 MLD to the existing 300 MLD to address the crisis.

Engineer Arif also said that the development works of the treatment plant will be completed before the scheduled time of December this year.

He informed that around 84 percent people of the city will come under water supply for 18 hours after the treatment plant goes for operation.

The superintendent engineer also said that they will be able to ensure 100 percent water supply to the city dwellers by 2021 if all the projects taken earlier are implemented in due time.

Mentionable, a good number of initiatives were taken to increase water supply keeping pace with the increasing demand for water over the last few years.

Of them, CWASA set up a water treatment plant having capacity of 140 MLD in Pomra area under Rangunia upazila in the district last year.

The plant ‘Sheikh Hasina Water Treatment Plant’ was set up under KWSP, Phase-1 with the financial assistance from the Japan International Cooperation Agency (JICA).

Prime Minister Sheikh Hasina inaugurated the plant, which meets 70 percent demand of water in the city, on March 13 last year.