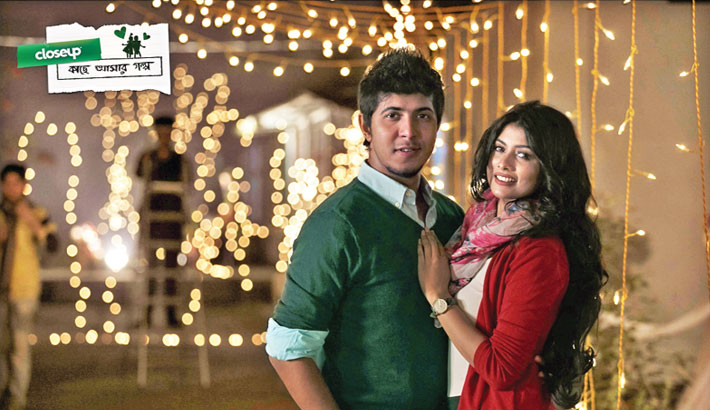 Once again Closeup is back with “Closeup Kache Ashar Golpo 2018” to celebrate Valentine’s Day with 3 brand new dramas based on stories sent by audience. From January 01-21, 2018, people were asked to send love stories. From the thousands of entries, the winning stories came from A. K. M. Mahfujul Alam Anick, Md. Khayrul Hassan and Md. Rafikul Islam. Three dramas have been produced for TV from these winning stories, which will be telecast on Valentine’s Day. Three popular directors were given the responsibility of bringing these stories to life.

A. K. M. Mahfujul Alam Anick’s story has been directed by Rubayet Mahmud. The drama “Tobuo Bhalobashi” stars Siam Ahmed and Safa Kabir in the lead roles. This is the first time these two actors have paired up for a drama. The title song has been composed by Adit Rahman.

Director Mabrur Rashid Bannah has directed Tawsif Mahbub and Mumtaheena Chowdhury Toya for the drama “Ami Tomar Golpo Hobo” based on the story sent by Md. Khayrul Hassan. Musical sensation Minar Rahman has composed a song for this drama.

Actors Manoj Kumar and Sabila Nur will be seen for the first time together in Shafayet Mansoor Rana’s drama “Shohore Notun Gaan”. The storyline of this one has been written by Md. Rafikul Islam while the title song has been composed by Raef Al Hasan Rafa.

The dramas will be aired on the Valentine’s Day (14 February) on Banglavision at 8:45 pm. Later the dramas will also be available on Closeup Bangladesh’s YouTube channel.