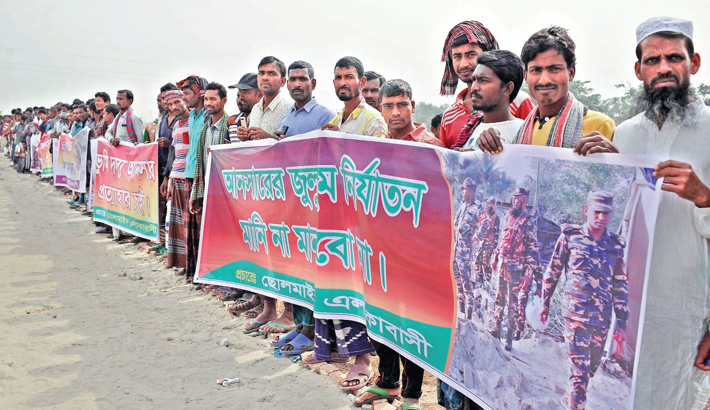 Hundreds of people of Solmaid area in the capital form a human chain on Sunday in protest against land grabbing by Hirajheel Bashumati housing project. – SUN PHOTO

Residents of Solmaid under Vatara in the capital have protested against the grabbing of their ancestral land by Hirajheel Bashumati Housing Project.

They formed a human chain protesting against the land grab by the housing company owner, Nasir Uddin alias Nasu on Sunday.

Hundreds of residents of Solmaid area took part in the human chain in front of Bashumati Housing Project adjacent to Bashundhara residential area at Baridhara in the capital in the morning.

The affected people said they want to get back their land taken away by Nasu and his cadres.

The demonstrating residents sought the intervention of Prime Minister Sheikh Hasina in this regard.

If they do not get back their land properties, they will go for a massive movement, they warned.

Alhaj Nazrul Islam Dhali, convener of the committee for protecting and recovering land of Solmaid people, led the human chain.

Sources said Nasu has not bought a single decimal of land but grabbed a hundred bighas of land illegally.

Nasir Uddin has temporarily allowed the ansar to set up their camp on the land in a bid to protect his reign over the properties.

If affected people raise voice against the occupation, they are subjected to torture by ansar forces and cadres of Nasu, said victims.