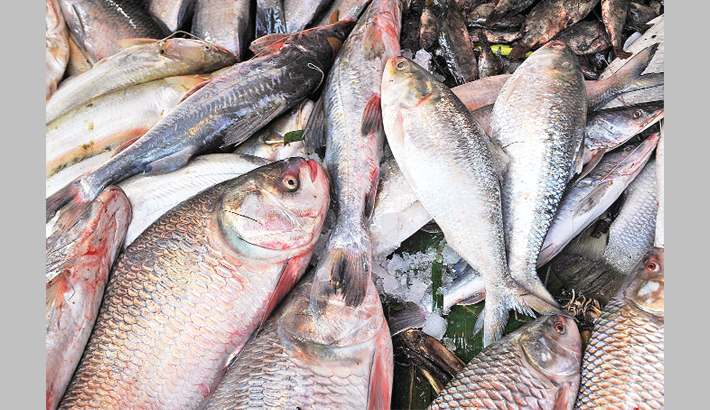 Fisheries and Livestock Minister Narayon Chandra Chanda disclosed the achievement at a press conference held at the Secretariat on Sunday.

“After 46 years of our independence, the country is now self-sufficient in fish and meat production,” said the minister.

According to a report from the fisheries ministry, country’s annual fish production reached 41.34 lakh tonnes in 2016-17, surpassing the target of 40.50 lakh tonnes.

Fish production marked an increase of 84,000 tonnes in the year.

According to the Preliminary Report on Household Income and Expenditure Survey (HIES) 2016 of Bangladesh Statistic Bureau, per capita average fish consumption of Bangladeshi people is 62.58 gram a day, which is higher than the daily requirement.

“Through the attainment of self-sufficiency in fish production, we have been able to restore our heritage,” said the minister.

Referring to a report of the United Nation Food and Agriculture Organization (FAO), Chanda said that in 2016, Bangladesh ranked fourth in collecting fish from inland water bodies and fifth in overall fish production.

Now one is getting 121.74 grams of meat daily, which is more than the requirement, the minister added.

While responding to a question about meat price, he said that the initiative will be taken by March 15 to lower the prices.

Besides, Chanda added that the Hilsa production has been increased 66 percent in least eight years. So the Hilsa will be exported after fulfilling local demand.