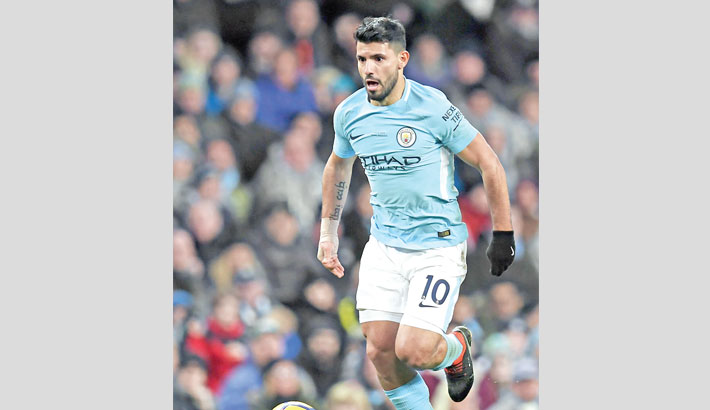 Manchester City striker Sergio Aguero runs with the ball during their EPL match against Leicester City on Saturday.

Aguero now trails Harry Kane by just two goals in the race for the golden boot, but just one from Kane was enough to win the North London derby as the Tottenham striker’s seventh goal in as many games against Arsenal secured a 1-0 win.

Earlier, Kane’s towering header four minutes into the second half earned Spurs a deserved derby win, as only some wayward finishing and stunning goalkeeping from Petr Cech saved Arsenal from further embarrassment in front of a Premier League record crowd of 83,222 at Wembley.

“He is the present and the future,” said Mauricio Pochettino when quizzed whether Kane’s dominant header possessed traits of an old-fashioned English centre-forward.

At the other end of the table, Swansea’s stunning revival under Carlos Carvalhal continued as Ki Sung-Yueng’s fine strike nine minutes from time earned a 1-0 win over Burnley to moved up to 15th.

West Ham also eased their relegation fears as goals in either half from Javier Hernandez and Marko Arnautovic ensured they moved five points clear of the relegation zone with a 2-0 win over Watford.

Stoke remain in the bottom three as Charlie Adam saw a stoppage-time penalty saved in a 1-1 draw against Brighton, while Everton eased past Crystal Palace 3-1.