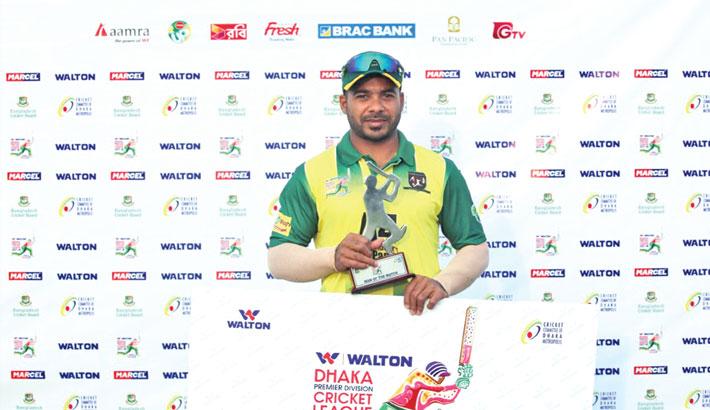 After Sheikh Jamal made a challenging 294 for 9 riding on Tanbir Hayder’s fighting 71and Digvijay Rangi’s 58, Agrani Bank lost wickets at regular intervals during the run chase stumbling to 83 for 3 in 22.4 over and were dismissed for 266 with five balls to spare.

Rifatullah Mohmand (43) and Dhiman Ghosh (48) registered a 62-run stand for the fourth wicket to bring them back in the hunt.

But Safiul kept their hopes alive smashing 31-ball 44 before being the last man out.

Earlier, middle-order batsman Tanbir top-scored with an impressive 71as Sheikh Jamal shook off a wobbly start to post a challenging 294 for 9 in their 50 overs.

Tanbir, who hit five fours and three sixes in his knock, carried the responsibility of taking Jamal to a fighting total after Elias’s departure.

Tanbir and wicket keeper Nurul had an unconquered sixth wicket stand of 82 runs, as they frustrated the Agrani bank bowlers who had done a fine job till then.

Asked to bat first, Legends of Rupganj posted a decent 231 for 7 in 50 overs relaying on opener Abdul Mazid’s 70.

Teenage pacer Onik, who played recently concluded ICC Under-19 World Cup, played a big role in upsetting the tempo with a brilliant effort of 5 for 44 in his 10 overs.

But Rupganj bowlers responded to the challenge admirably which saw Mosharraf Hossain (4/23), Asif Hasan (3/37) and Mohammad Shahid (3/33) play a stellar role as Mohammedan were dismissed for 169 in 44.3 overs.

A stellar performance with bat and ball by all-rounder Alok Kapali helped Brothers to a comfortable victory over Prime Bank at BKSP Ground 3 in Savar.

The player of the match Kapali then took three wickets for 46 runs as Prime Bank crumbled in the run chase to be dismissed for 270 in 47.4 overs.