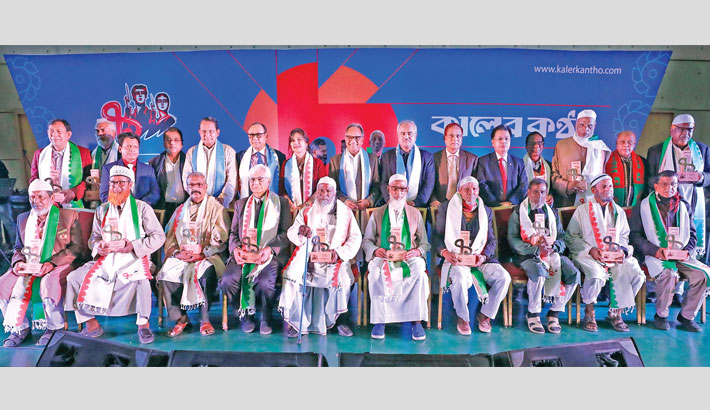 The daily accorded the reception to the freedom fighters at International Convention City Bashundhara (ICCB) in the afternoon.

Speaking on the occasion as the chief guest, Information Minister Hasanul Haq Inu said the Awami League regime led by Prime Minister Sheikh Hasina has ensured the freedom of the press.

Any news story and talk-show criticising any decision of the government are taken positively by the authorities, he claimed.

“The government’s main task now is to hold the next general polls timely and foil any move to obstruct the election,” the minister said.

Indicating BNP, he said, “Those who will try to foil the next parliamentary polls will be put on trial. They will meet the same fate of militants who are facing crackdowns.”

State Minister for Information Tarana Halim praised the initiative of Kaler Kantho for honouring the freedom fighters. She said readers prefer the Kaler Kantho for its objective journalism.

Addressing the function, Bashundhara Group Chairman Ahmed Akbar Sobhan said the liberation struggle that started in 1971 still continues. “A vested quarter is still plotting against the country’s independence and sovereignty. “We (Bashundhara Group and its media outlets) are working to highlight the spirit of the Liberation War,” he said.

Recalling the glorious contribution of the freedom fighters, Ahmed Akbar Sobhan said, “The freedom fighters we have here today are the legends as they inspired millions to join the Liberation War against the Pakistani forces.”

“We are a proud nation as we are living in Bangabandhu’s Bangladesh. The birth of liberated Bangladesh would not have been possible had Bangabandhu  not been born here,” he added.

East West Media Group and the entire Bashundhara Group are proud to be able to honour the freedom fighters, Ahmed Akbar Sobhan said.

Kaler Kantho Editor Imdadul Haq Milon said, “1971 is the most glorious chapter in Bengali nation’s history as that was the year we snatched our victory from Pakistan. It was a people’s war and all have equally contributed to it.”

On the occasion of its eighth anniversary, Kaler Kantho honoured the freedom fighters for their outstanding contribution to the Liberation War in 1971.

The newspaper honoured the war heroes with awards and cash money.