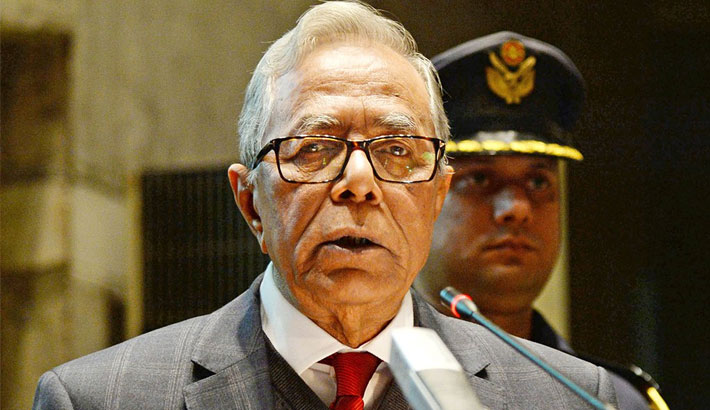 “The rule of law is very important in the democratic state and society. Police play the key role in carrying out these duties. So you have to remain steadfast while performing your duties neutrally maintaining democratic values and human rights,” the President said.

President Hamid was addressing a meeting with senior police officials at Bangabhaban, the Presidential Palace, marking the Police Week 2018.

“You need to be more responsible for establishing country’s internal security and secured society. Suppressing the wicked and keeping the law is the principle of police and you will have to discharge your duties in light of this principle,” he said.

President Hamid said people go to police when they are in danger. “You have to be particularly cordial so that every service-seeker can get service uninterruptedly from you,” he said.

Bangladesh Police should be established as a service-oriented and people-friendly organisation which is people’s expectation, he said.

Saying that the prime and sacred duty of police is to maintain internal security of the country, the security of the life and property of the people, establishment of the rule of law and preventing terrorism and crime, President Hamid said all-level police officers and police personnel must be active in providing legal assistance to the people from their respective position.

“Your collective efforts will continue to make Bangladesh Police as a people-oriented and service-oriented organisation to earn people’s dependence and confidence ground,” he said.

Hamid said the government has taken a massive action plan to increase and modernise the technical expertise of the police.

In this regard, the Cyber Crime Investigation Centre and DNA Lab have been established to investigate impartially militants and terrorism, drug detection, cybercrime and other sensational cases, he cited, adding that as a result, the overall technical competence of Bangladesh Police has increased greatly. “I hope future efforts will continue to develop and modernise the police.”

Hamid said Bangladesh Police has earned reputation for its professionalism in the United Nations Peacekeeping Mission alongside maintaining internal security of the country.

Female police members are also performing their duties successfully in the peacekeeping missions, he said, adding that the success and glorious role of the police in the international arena has given Bangladesh a unique status. “You must continue your nonstop efforts to uphold this honour achieved abroad.”

There is no alternative to people-oriented policing in modern police system. There is essential of mutual cooperation among police and public in preventing and controlling crime, he observed. “You have to work together with people strengthening the community policing activities for further improving the law and order,” he said.

“I want to remind you once again that you have to boost the bridge of love and friendship with the people to fulfill public expectations and earn their trust,” he said.