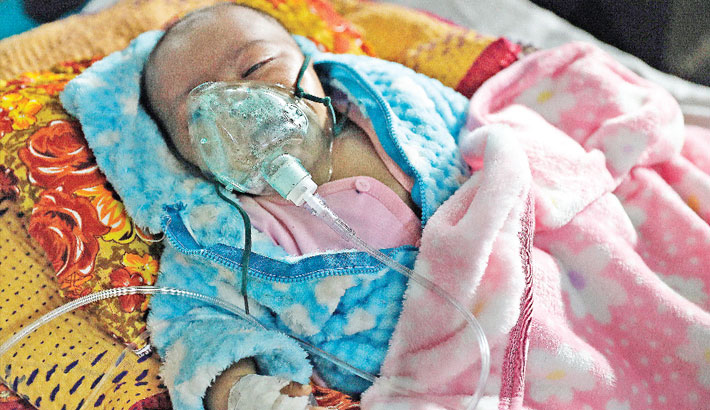 A child takes treatment at hospital in the capital on Monday after being attacked with a cold-related disease during the cold spell sweeping across the country. - sun photo

The severe cold wave sweeping across the country for the last couple of days has hit hard the life of common people, particularly the poor living in slums and open spaces.

Children and elderly people are the worst affected by the persisting severe cold.

While visiting a slum at Plassey in the capital, this correspondent found that many slum-dwellers are shivering with biting cold on Monday.

Faridur Rahman, 77, a beggar living in the slum said it will be difficult for him to survive if the cold wave continues. His body was wrapped with a torn blanket.

Hailing from Lalmonirhat, he is living in a shanty made of polythene. Rahman came to Dhaka three years ago after death of his 20-year-old son Malek in a road crash.  The elderly man has none to look after him.

Like Rahman, the helpless people of 15 shanties at Palashi slum are now leading a sub-human life. Most of the sufferers are beggars, rickshaw-pullers, domestic workers and day labourers. Even, some of them are living under open sky wrapping thin blankets to protect them from the shivering cold, but to no help.

“Sometimes, I wanted to commit suicide to get rid of this torment, but I restrained myself thinking it a great sin in my religion”, a disgusted Faridur told the daily sun on Monday.

This correspondent also visited Kamalapur Railway Station to see the plight of the hapless people.

As he approached Romisa, an elderly woman, who along with her younger daughter, came to Dhaka from Kurigram about five years ago, burst into tears. Cursing her fate, she told him that they had burnt straws for warming themselves as they had no ability to buy warm clothes from markets. She said: “Father, it is very difficult to stay out at night, but we are helpless. Till now, none stood beside us to hand over, even, a single blanket or warm cloth.”

At the same spot, this correspondent saw a mother with a child in her lap,  trying to protect from the biting cold of the season. They wrapped a thin blanket over themselves. Sitting beside at a fire, she was waiting for someone for distribution of warm clothes to them.

Most pathetic was that an eight-year-old child, wrapping a bed-sheet on his body,  was trying to save himself from the cold wave of the most coldest winter of the decade. But, none came to their rescue.

At Azimpur bus stand, this correspondent observed a young girl preparing a makeshift tent for sleeping after the day’s hardship.

Sharmila Jahan,22, came to the capital city from Mymensingh to earn a living pursuing the work of domestic help. She told that she is compelled to stay at the bus stand as the house rent in the city is beyond her capacity.

She said “We suffer most as we lack warm clothes which are being sold on the footpaths at exorbitant prices. Our sufferings mount when policemen drive us away from out original place.” “But, where shall we go?, she posed a question to this correspondent.

Another destitute named Mamata lamented saying: “Last year, we got warm clothes from different NGOs and social welfare organizations, but this year we are being deprived of those due to arrival of Rohingyas.”

At the TSC of Dhaka University (DU), this correspondent saw a good number of street children on its porch. All of them wore old clothes and were shivering in the biting cold. They are prone to get attacked with cold- related diseases, including pneumonia, asthma and respiratory diseases.

However, a group of students went to different places of the city and distributed blankets among the destitutes. But, it is too meager to meet the requirement of needy people.