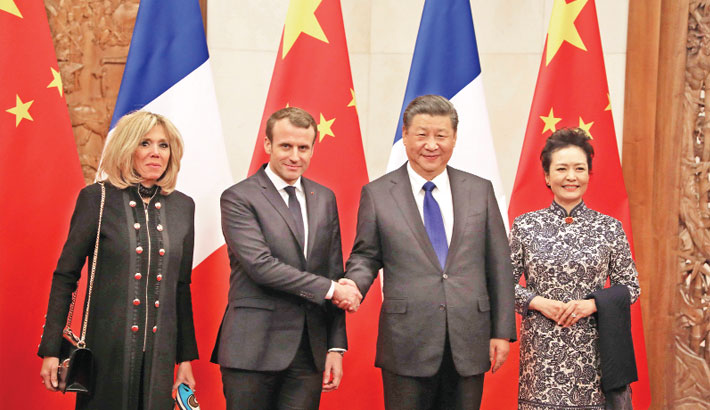 French President Emmanuel Macron and his wife Brigitte Macron pose with Chinese President Xi Jinping and his wife Peng Liyuan during their meeting in Beijing on Monday. — AFP PHOTO

XIAN, China: In a response to panda power, French President Emmanuel Macron is betting on equine diplomacy during his first state visit to China—presenting his Chinese counterpart Xi Jinping with a horse as a gift, reports AFP.

The animal, a retired Republican Guard horse named Vesuve de Brekka, is in quarantine. But Macron will show a photo of it to Xi when they meet later Monday in Beijing.

The French presidential office said Xi had been “fascinated” by their equestrian skills when he was escorted by the guard during his visit to Paris in 2014.

“Wishing to have friendly ties with foreign heads of state, Emmanuel Macron wants to make more than a gift—a diplomatic gesture,” the presidency said.

The eight-year-old dark brown horse took part in its last presidential escort on November 11 on the Champs-Elysees. The horses are ridden by sword-wielding guards on formal occasions.

Macron’s first official visit to Asia marks a new stage in his diplomacy, which has so far been concentrated on Europe and Africa.

He plans to seek a “strategic partnership” with Beijing on issues including terrorism.

Macron, on the first day of a state visit, also called on Europe and China to team up on curbing climate change in the face of the US decision to withdraw from the Paris accord.

“Our destinies are linked,” he said in a keynote speech on the future of Sino-French relations during a visit to the northern city of Xian, the starting point of the ancient Silk Road.

“The future needs France, Europe and China,” Macron said, adding he would travel to China “at least once a year”.

Macron started his three-day visit in Xian as a gesture to Chinese President Xi Jinping’s huge New Silk Road project, an initiative to connect Asia and Europe by road, rail and sea.

The $1 trillion infrastructure programme is billed as a modern revival of the ancient Silk Road that once carried fabrics, spices and a wealth of other goods in both directions.