Tk 250cr project to be implemented within one yr 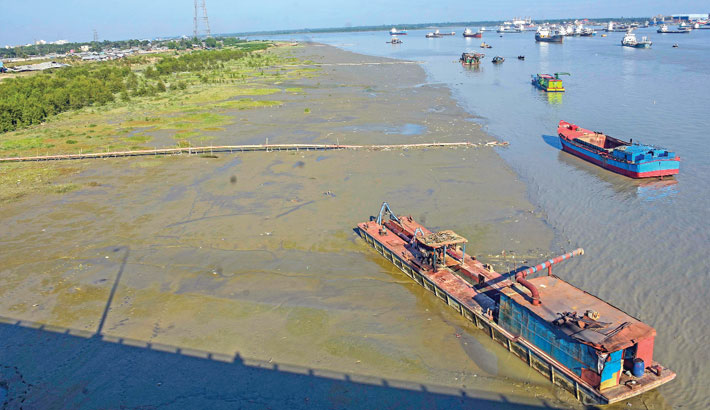 Silt accumulates on the Karnaphuli riverbed in Chittagong as large-scale dredging of the river has remained stalled for around four years, turning the river into a narrow stream. The snap was taken from Shah Amanat Bridge on Monday. - Rabin Chowdhury

CHITTAGONG: The much-awaited capital dredging in the river Karnaphuli, the economic lifeline of the country, will begin afresh soon.

The project got approval from the purchase committee recently to be implemented through the Bangladesh Navy in Direct Procurement Method (DPM), said Chittagong Port Authority (CPA) Secretary Omar Faruk.

The ‘notification of award’ will be given within a week and then works of the project will start, he said.  The Tk 250 crore project will be implemented within one year and maintenance will be carried out for the next three years, said the secretary.

Sources in CPA said due to lack of dredging for around four years, the riverbed got silted up hampering its navigability and movement of large vessels to and from the Chittagong port jetties through the port channel of the river.

It has also been contributing much to the waterlogging in the low-lying areas of the port city as mouths of the canals got filled with the siltation.

The siltation also filled in some 250 to 300 metres on bank sides of the river from Sadarghat to Bakolia and it becomes visible during the low-tide, said the sources.

Many areas on both banks of the river are also encroached by land grabbers cashing in on the situation, they said.

Mentionable, to facilitate movement of large vessels, the CPA took up a project titled ‘Karnaphuli Capital Dredging Project’ in 2011.  CPA signed an agreement with ‘Malaysian Maritime and Dredging Corporation’ for implementing the project at a cost of Tk 229 crore on April 28 of the same year.

The project works also included bank protection and development of jetty facilities and were scheduled to be completed by January 2 in 2013.

The Malaysian firm constructed 98 percent of the 400-meter jetty and some 90 percent of the 2.6-Kilometer embankment from Sadarghat lighterage jetty towards upstream. But, only some 40 percent of the dredging work was done before the Malaysian contractor fled without completing the project work despite getting the completion period extended for several times.

Moreover, the company’s local partner ‘Pacific Marine Services’ owner Abu Jafar left the project withdrawing 70 percent of the bills against 56 percent works, said the sources . The CPA ordered the company for stopping the works in mid 2014 as it could not complete the works within the deadline.

The contractor filed lawsuit following the order. As the verdict came in favour of the CPA, the authorities took initiative to resolve the complexities in 2016.   Due to the complexities, dredging  in the important river could not be carried out over the years.

Later, the CPA authorities took the initiative to implement the works with a separate project titled ‘Sadarghat to Bakolia Char Dredging Project’.

According to survey report of the Bangladesh University of Engineering and Technology (BUET), some 4.2 million cubic metre soil and sand will have to be dredged from the 2.5 Kilometre riverbed and 250 metre bank areas.

After completion of the works, the four lighter jetties in Sadarghat can be made functional, said the sources in CPA.

Chittagong Chamber of Commerce and Industry (CCCI) President Mahbubul Alam said once the riverbed is dredged, the large vessels will be able to take berthing at the port jetties and the lighter jetties will be functional.

“It will help reduce the turnaround time of the vessels and cost as well. People will get ultimate benefit from it,” observed the business leader.