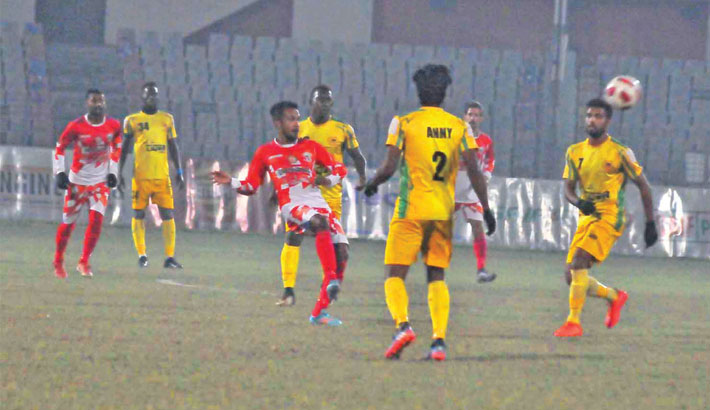 Sheikh Russel Krira Chakra were forced to share points with lowly ranked Rahmatganj Muslim Friends Society as their round-21 encounter of Bangladesh Premier League finished in a goalless draw on Monday.

Russel were looking forward to collect full points from yesterday’s match held at Bangabandhu National Stadium in the capital but Rahmatganj showed determination and denied Russel from scoring any goal.

After round-21, Russel maintained their grip on the 6th spot of the points table collecting 26 points.

After a great display of football throughout the season, Jamal had to be contended with runner-ups title.

As the league title and runners-up positions have been decided already, the middle ranked and bottom ranked teams are busy fighting for last few points to consolidate their place in a better position before the season of premier football fades away.

Before yesterday’s clash, Arambagh were in 9th place in the 12-team league and BJMC were in 8th place but with full three points, Arambagh made a quantum jump and moved up to two spots and grabbed 7th place in the league after round-21.

Arambagh, collecting only couple of points, were in doubt to qualify for the next season with when the first leg of BPL was going on full rhythm, but they have proved to be a worthy opponent and made brilliant comeback to stay in the professional league for future edition.

The first half of yesterday’s match was quite eventful for both the teams. Attacks and counter attacks from both sides were charged in frequent occasions. It was unfortunate for the teams as the galleries were mostly empty and few football lovers were present to cheer for their teams.

The first half remained goalless and equal competition from two sides looked like the match might end up in a drawn result. However, it was Arambagh’s substitute midfielder Arif who was the architect of the solitary goal of the match. Arif took a shot from their forward Sumon Ali’s corner in the 83rd minute and the ball touched BJMC’s nets.

Team BJMC were desperate to level the score in the closing few minutes but Arambagh had the last laugh at the end of the day.

The curtail of BPL will close down on January 13 but the booters will be busy again in fields in no time as Independence Cup tournament will roll on the ground after a short break of two days.