Man who carries horses on his back 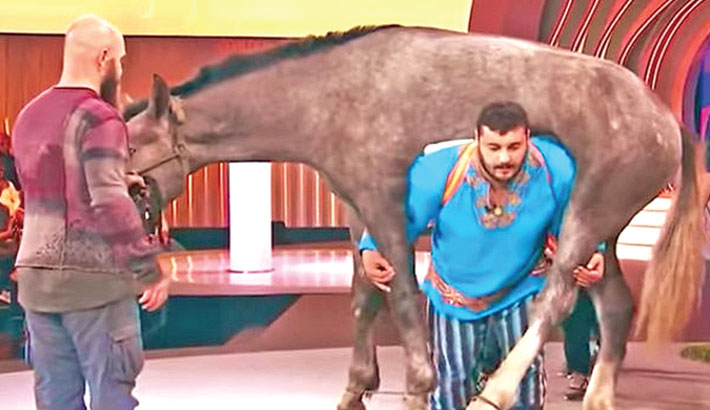 Humans have been riding horses for thousands of years, but one Ukrainian strongman proves that horses can sometimes ride us too. Champion powerlifter Dmytro Khaladzhi has been making quite a name for himself by carrying live, fully conscious horses on his back to prove his incredible strength.

Like most strongmen, Dmytro Khaladzhi does a lot of crazy stuff, like letting trucks drive over him, bending steel rods with his teeth, or driving nails through wood with the palm of his hand, but his horse carrying routines are by far the most impressive. Several videos doing the rounds online show him grabbing full-grown horses, lifting them on his back and taking a few steps with the incredible load, all while the confused animals enjoy the ride.

It doesn’t always go smoothly, as horses aren’t exactly used to be lifted off the ground and carried around by a puny human, but they have their legs bound so that they don’t do too much damage when they start freaking out. The most they can do is cause Khaladzhi to lose his balance, sending them both crashing down.

A Wikipedia page on Dmytro Khaladzhi claims that he holds a whopping 63 Guinness Records and the champion of the 1st championship of the Ukrainian Drug-free Powerlifting Federation, in the bench-press category. There’s nothing about his horse-lifting there, though, which is kind of strange, as that’s what really makes him special in my book.

According to a Donbas-based news site, the 38-year-old strongman has chosen to live in the war-torn region of Ukraine, even if it meant putting his athletic and acting careers on hold. He reportedly joined the separatists there and occasionally provides the entertainment with his outrageous routines.