Shesher Kobita to be staged at BSA today 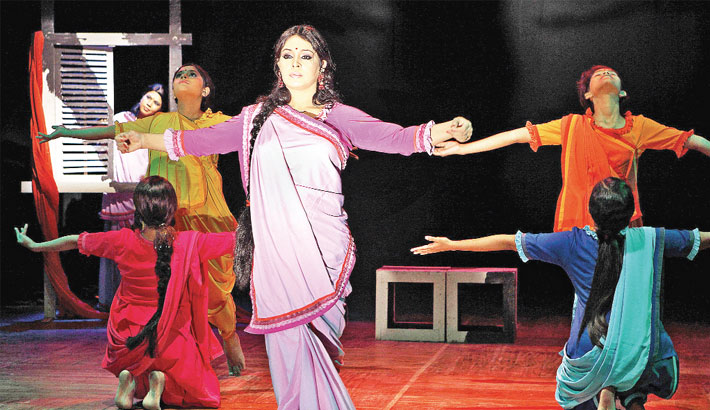 The special show of the play made Amit and Labanya, a romantic couple from Rabindranath Tagore’s text and their oft-read romance, alive on stage again for the theatre-goers that evening.

The roles of Amit and Labanya for the play was played by real-life couple Nuna Afroz and Ananta Hira, often considered by theatre-lovers a brilliant chemistry of romance on stage.

Widely termed a landmark in the realm of romantic Bangla literature, Shesher Kobita is mainly a much popular fiction by Tagore.

Directed by Nuna Afroz and scripted by Ananta Hira, Shesher Kobita, the sixth production of Prangone Mor, revolves around Amit, an Oxford-return barrister, who is playful, bombastic, and erudite and has an immense aura to others.

He, by fate, meets Labanya, a traditional Bangalee lady with the sense of sarcasm, through a car accident.

Instantly attracted to each other, their relationship develops over an exchange of letters that contain poems. However, with the passage of time, they have to face troubles and their faith in each other is tested as the story progresses.

Nuna Afroz, Shuvechchha and Shumi acted as Labanya while the role of Amit was played by Ananta Hira and Ramiz Raju in the play.