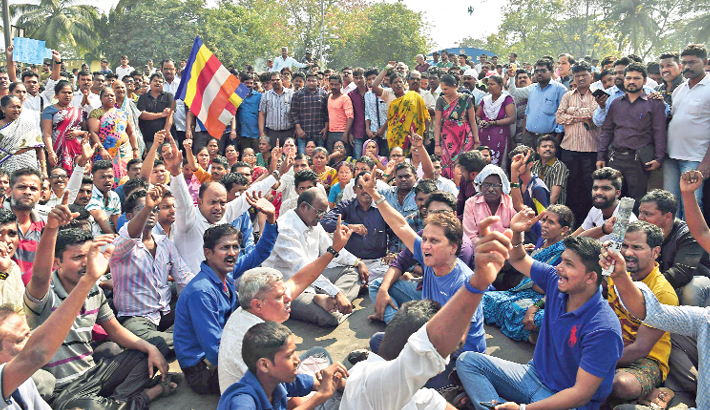 Republican Party of India (RPI) supporters shout slogans as they block traffic on the Eastern expressway during a protest in Mumbai on Wednesday.-AFP PHOTO

Members of the Dalit community obstructed roads, damaged buses and marched down railway tracks, delaying train services which are the lifeline of India’s bustling financial capital. Some schools and business opted to close as a precaution while the city’s famous lunchbox delivery men, called “Dabbawalas”, also cancelled their services.

The protests came in response to violence which broke out at a ceremony in a village near Pune in Maharashtra state on Monday, leaving one man dead.

Dalits had gathered to celebrate the anniversary of the Bhima-Koregaon battle in 1818, in which they helped British colonial forces defeat the high-caste Peshwas.

Dailt leaders accused right-wing Hindus of inciting Monday’s clashes, which spread to other areas of Maharashtra of which Mumbai is the capital. The state government has ordered a judicial inquiry into the clashes. Mumbai police said more than 100 demonstrators had been arrested and nine cases of unlawful activity had been registered. On Wednesday politicians called for a peaceful end to the violence. “There is an attempt to create a social divide which we have to foil unitedly,” said Neelam Gorhe, a leader of the right-wing Hindu party Shiv Sena.

Devendra Fadnavis, the state’s chief minister, has ordered a judicial inquiry into the clashes in Pune. Many domestic airlines have waived cancellation charges on flights to and from Mumbai as well as other neighbouring cities. The city also witnessed violence on Tuesday as protesters pelted stones at trains and clashed with security forces in several locations.

Meanwhile, Bharipa Bahujan Mahasangh leader and BR Ambedkar’s grandson Prakash Ambedkar has withdrawn the state-wide bandh after normal life was badly affected in Mumbai and other parts of Maharashtra on Wednesday, reports Times of India. Dalit groups had called for a complete shutdown in the state in protest against the violent clashes that broke out during the Bhima Koregaon battle anniversary in Pune on Monday. “The bandh was mostly peaceful barring two incidents in Mumbai and one in Aurangabad. I want to congratulate the protestors as they kept their calm even at a time when the emotions were very high. Police is taking combing operations in Aurangabad and that they should stop immediately,” said Ambedkar. “People are extremely hurt at the communal tensions in the state the contributions of the marginalized community towards nation building are being questioned today,” he added.